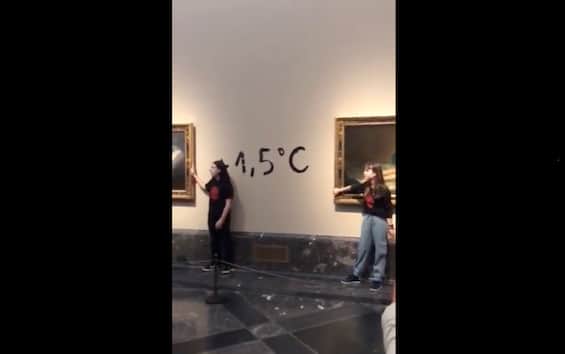 Another protest action to raise awareness on the climate emergency and which has targeted art: this time it was the Prado museum in Madrid, where two girls stuck their hands on two works by Francisco de Goya. The police intervened on the spot. The Prado Museum in a tweet “condemns” the act “of protest” and ensures that the paintings have not been damaged, while “the frames show minor damage. We are working to get back to normal as soon as possible. We reject endangering cultural heritage as a method of protest “.

The activists, who are part of the environmental collective Futuro Vegetal, have glued their hands to the frames of two paintings known as “Las Majas”, “La Maja nude” and “La Maja” dressed by the Spanish painter. On Twitter the group released a video of the raid: it can be seen that between the two paintings it has been written “+1.5 ° C”. The intent of the environmentalists was in fact “to warn of the increase in global temperature that will cause an unstable climate and serious consequences throughout the planet”. From its Twitter account, the organization explains that last week the UN “recognized the impossibility of remaining within the limit, established by the Paris Agreement, of 1.5 ° of average temperature increase compared to pre-industrial levels. our ability to cultivate, as extreme weather events such as drought will become more frequent. Despite this, government policies continue to subsidize the industrial agri-food system, one of the main culprits of the climate crisis and above all vulnerable to the climate context we have behind it. angle. We have to change now. “

The squeeze on security

Just two weeks ago, the Spanish Ministry of Culture announced that it would strengthen the security of museums against possible attacks. The ministry had asked the art galleries to enforce the access rules. These include the prohibition of bringing objects, drinks, backpacks and bulky packages into the rooms, as well as umbrellas or sharp objects.

The precedents, from Rome to London

This protest is in addition to others that have taken place in recent weeks. The latest was yesterday 4 November in Rome, at Palazzo Bonaparte, where four activists threw pea soup against The sower by Vincent Van Gogh. In October, two members of the Last Generation group had instead smeared a Monet oil at the Barberini Museum in Potsdam, Germany, throwing mashed potatoes at him. Also affected is the famous painting by Vermeer, The girl with the Pearl Earring, exhibited at the Mauritshuis Museum in The Hague: an activist tried to glue himself to the painting while a second spilled a can of tomato sauce on him. The first masterpiece to be targeted was however Sunflowers by Van Gogh, preserved at the National Gallery in London: around mid-October two ecologists of the Just Stop Oil campaign had launched on the work of the soup. Demonstration actions of this nature are also on the rise in view of COP27, the conference dedicated to climate that this year will be held in Egypt.