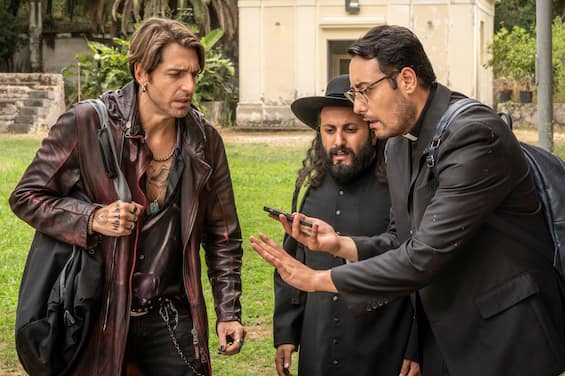 A film that between laughter and adventures can easily be defined as a “action comedy”. Giampaolo Morelli signs his second direction setting a comedy between Naples and Rome in which the sudden and mysterious lack of cannabis seedlings will convince a “gang” of loosers (as the director himself defines them laughing) to try to bring happiness back to the world, thanks to the fortuitous discovery of a last exemplary.

An ensemble cast for Let it spin by Morelli who is also a screenwriter with Gianluca Ansanelli and Tito Buffolini; among the performers Laura Adriani, Ciro Priello, Fabio Balsamo, Giovanni Esposito and with the extraordinary participation of Michele Placido. The film is available on Prime Video from November 25th.

Here’s what Giampaolo Morelli told us

Giampaolo the title of the film is already quite clear Make it spin – The last joint.

But now tell us exactly what are you referring to?

(Laughs) Well let’s say I’m referring to cannabis and in the film we are in a not so distant future in which all the seedlings have become extinct, even if we don’t really know why. Someone says it’s a virus, others think there’s a conspiracy behind it.

I play Natan, an influencer whose likes are declining who accidentally burned his girlfriend’s hair during an Instagram live! Well Natan, by chance, finds the last cannabis seedling together with a gang of “loser” friends like him. The problem however is that this plant is a male and to produce the seeds we need a female specimen; the situation becomes more complicated because the female is kept in the botanical garden of the Vatican and therefore we make up our minds that we must steal it at all costs.

What are you motivated by? Do you want to bring happiness back to the world or do you want to earn money easily?

Well, everyone has their own interests. For example, I do it for money because my career as an influencer is now winding down, the character played by Ciro Priello from The Kackal, for example, is instead a journalist who is convinced that since there has been no more marijuana, suicides in the world have increased.

It is a very Neapolitan film, especially in the type of comedy. How important is your link with this city?

Very very much. Like my first film Seven hours to make her fall in love, this too has a Neapolitan soul. Then in my work I always try to combine my two cultures: one is the Neapolitan one that I wouldn’t be able to ignore, the other is my film training which has its roots in American cinema.

So I tried to merge them. I remember that as a boy, when I walked around Naples perhaps on my way to the University, at every corner, at every glimpse I thought “here it would be wonderful to shoot a scene for a film”. From the Americans I also learned the importance of valuing the city where you were born, or where you shoot a film. From that cinema I also took on a passion for action and adventure, emotions that I have also tried to put into this work.

How difficult it is to find the right joke, the rhythm, the comedy. So how hard is it to make the audience laugh?

It’s very difficult! I think it’s the hardest thing because behind every joke there is obsessive attention. For example, as a director, I leave very little room for improvisation.

Obviously I don’t mean that the actors aren’t free to add nuances or have fun, but I always try to maintain a certain rigor, a certain order in what is the focus of each scene. In short, I don’t like excessive “dirt” or improvised gags because in my opinion they take away the strength of the story. So I hope in Let it spin you can laugh a lot but there was a lot of preparation behind it”.

How important is making cinema to you?

“I couldn’t do anything else, it’s very important to me. Many colleagues love the theatre, but here I adore the “smell of the set” made up of 70 people close to each other who work, sweat, talk, create. I could never give it up. Plus this movie comes out on Prime Video on November 25th which is also my birthday. And I consider it all a beautiful gift.

In the not too distant future, a serious attack on freedom has been carried out: a virus has attacked hemp plantations around the world. Cannabis no longer exists. And with it, freedom and happiness also seem to have become extinct. But one day the unthinkable happens: Natan (Morelli), a vain influencer, finds a male specimen by chance and, determined to become rich, sets up a shabby gang to reach the last surviving female seedling, and produce seeds and sell them at a drug trafficker. An action-comedy seasoned with hilarious and daring situations, led by two polar opposite characters, an influencer and an intellectual, who well represent the complexity of the modern world.