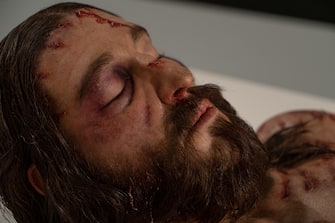 He carries wounds all over his body, his face is swollen, his hair is soaked in blood. He is the man of the Shroud who can now be seen in the exhibition “The mystery man” in the cathedral of Salamanca, Spain

What is the Shroud and what is its history

It took about fifteen years between studies, construction of the body and the preparatory course. The exhibition is open to the public starting from Salamanca, which with the rites of Holy Week every year commemorates the Passion of Christ in a monumental way

Parchment on the authenticity of the Shroud of Arquata returns ‘home’

“The goal – explains Francisco Moya, CEO of ArtiSplendore, the company that promotes the event – is that this exhibition becomes a pilgrim, a non-itinerant pilgrim”, he specifies, to arrive also in Turin, the city of the Shroud, in Lisbon for the World Youth Day of 2023, “and we hope also in Rome for the Jubilee of 2025”

Ukraine, Christ statue of Lviv brought to a bunker

“We have supported this initiative from the very beginning – emphasized the bishop of Salamanca, Mgr. Jose Luis Retana Gozalo in a press conference – now our eyes can really see what the passion and suffering of Christ was”

“It is a unique moment of truth, it is not an artistic interpretation, this is the body of a man whose wounds and sufferings correspond perfectly to the stories on the Passion of Christ”, explained Alvaro Blanco, curator of the exhibition that was inaugurated in Salamanca

The information obtained from the Shroud of Turin and the new technologies have led to a result that had never been achieved until now. A hyper-realistic figure, with his suffering but also all his nakedness. “We are ready for controversy – replies the curator – but on the other hand there were also when Michelangelo’s Sistine Chapel was unveiled”

“We have supported this initiative from the very beginning – underlined the bishop of Salamanca, Monsignor Jose Luis Retana Gozalo – now our eyes can see what Christ’s passion was”. The bishop admitted that it took “courage” to host such a ‘raw’ figure in a church, in his suffering and his nakedness

“But we need courage to evangelize”, remarked the monsignor. On the other hand, “the Mystery became flesh and this body shows people that God became man and suffered for us”

The exhibition is a journey through art, archeology and science on the Holy Shroud which are shown for the first time together in this 600 square meter exhibition. The story of the Shroud preserved in Turin is reproduced as well as some objects from the story of the Gospels, from the thirty denarii of Judas to the whips, from the spears to the iconography that represented the face and body of Christ over the centuries

A multimedia section immerses, through photos, lights and sounds, in the sacred images that have followed one another over the centuries. Carlos García Carbayo, mayor of Salamanca, described The Mystery Man as “a great exhibition that will have a worldwide echo and that comes out of Salamanca, is a source of pride for all of us”

The exhibition will in fact remain in Salamanca until December and then tour the five continents. Among the first stops planned in Spain there will be the city of Malaga, another city that like Salamanca has a very long tradition in the rites of Holy Week