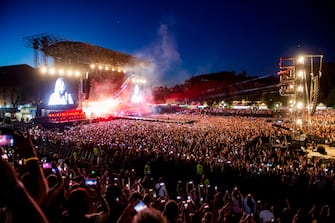 Maneskin show at the Circus Maximus in Rome, on the evening of 9 July, in front of 70 thousand spectators. Two hours of show, made in collaboration with Rock in Roma, to retrace their fairy tale in music

WATCH THE VIDEO: Maneskin, 70,000 at the Circus Maximus amid controversy

The start could only give him the overwhelming energy, between tongues of flames on the stage, of Shut up and Good. Then it was the turn of In the name of the father and Mammamia, to get to Chosen, the band’s first hit single of 2017, presented during X-Factor and to Womanizer, the tribute to Britney Spears

Måneskin, the Supermodel video is out. Between Tarantino and Hitchcock

Intense, as always, is the moment when Damiano sang Coraline, dedicated to his girlfriend Giorgia Soleri. Space also for the last single Supermodel, for the cover Amandoti, for I wanna be your slave and for the cover inserted in the film Elvis If I can dream

From the Circus Maximus – on the notes of Gasoline – that liberating cry resounded again, which had already been around the world at Coachella: “We continue to say it even if someone bothers: Fuck Putin, fuck the war, fuck the dictators. And to those who disagree: Fuck ”

THE LADDER OF THE CONCERT

Before the end of the live, a few dozen fans were invited to take the stage during Bruises on the elbows. The closure dei bis was with The distant words and I wanna be your slave

The Maneskins were also there to applaud many VIPs like Edoardo Leo, Riccardo Scamarcio, Gabriele Muccino, Anna Ferzetti, Anna Foglietta and the Roma players Marash Kumbulla and Edoardo Bove. Also present was the actress Angelina Jolie

After Rome, and after the summer tour that will take them to the most prestigious world festivalsthe first world tour will start in autumn: the Loud Kids Tour (over 60 dates with 500,000 tickets already sold)

In the photo, a moment of the concert on July 9 in Rome

In the photo, another moment of the concert on July 9 in Rome