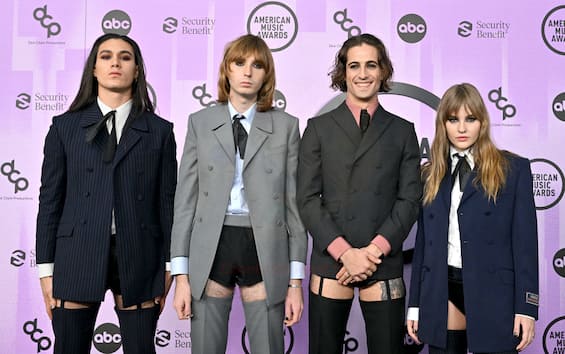 After the “musical wedding of the year” which “in joy and in pain” sanctioned the mutual fidelity between Damian, Victoria, Ethan And Thomas on the occasion of the presentation of the latest album Rush! at Palazzo Brancaccio, i Maneskin treated guests to a mini-live of their hits, including some tracks from the new release. The expressive urgency of the Roman band, which in Rush! he alternated the bravado of rock’n’roll with the impetus of punk and ballads, he pierced the raw pieces with Damiano’s incisive and cutting voice, between the euphoria stretched between the razor’s edge and the fear of falling and the journey of self-discovery and emotions. Once the great expectation has ended, the world is now listening to the Roman band which in 2022 experienced a golden moment, from the return to San Remo Festival to the application to Grammy Awards 2023 in the Best New Artist category, and again from participating in the Coachella Festival to the maxi-concert at the Circus Maximus From Rome.

The reviews of Rush! they also came from overseas, where critics have not spared negative opinions. On the pages of The Atlantic critic Spencer Kornhaber titled the slating to the Måneskin Is this the band that’s supposed to save rock & roll? and ruled that the Roman group “looks much cooler than it sounds”. Defined as a “bar band in burgundy leather”, with the simple and spontaneous singles Beggin’ And Shut up and Good the Måneskin would have shown “audacity” in designing “pleasantly dirty” atmospheres, while in di Rush! they would compose songs “so clearly recycled, so unabashedly mediocre that the idea of ​​the group igniting a culture war between rock and pop” is “tragic at best”. The lyrics would be nothing more than “timid attempts to shock and cause annoyance”, and the popularity of Måneskin would be all about “memorable television exposure”. Within the American press he echoed, in more moderate tones, Rolling Stonewho called the band “the Italian saviors of sleaze-rock that we probably don’t need right now – but they’re still quite entertaining”. In Italy, however, on the occasion of the presentation of his concert program, the famous violinist Uto Ughi he defined Måneskin “an insult to culture and art”, specifying that he is not angry with the Roman band in particular because “every genre has the right to exist, but when they make music, and not when they just scream” and also underlining the “serious lack of musical education for young people” in schools, where “frightening gaps emerge”.

However, there were also positive comments. The Guardianwhich recalled the young band’s performance on the US tour of Rolling Stonesthe collaboration with Iggy Pop and the soundtrack to the biopic Elvis Of Baz Luhrmannhe described Rush! as a “Enthusiastic record inspired by loads of influences”. Rockol instead he recognized not only the “international jump” accomplished by the album and the consequent better quality of the songs in English compared to those in Italian, but also the “powerful piecesplayed, certainly under a more pop-rock filter, but in its complexity it’s not all musically harmless like a lot of contemporary chart music”. Rush! is perhaps “a great pop-rock playlist that tends to repeat itself”, but the new generation audience “gives a damn, for the time being, on what came before” and will welcome the album “like a great pop-rock roller coaster, capable of entertaining, making people dance and jump claiming the right to party”. For Ellehowever, the album “is very fond of rock stereotypes, with an at times redundant hammering on stories of sex, drugs and excesses, but it is also a sincere celebration of them”, especially in “a musical moment in which genres last little”, therefore “remaining faithful to the guitars and scratched vocals is commendable”, therefore “the Måneskin will continue to ride rock, not caring about the fashions of the moment”. The Skinny finally concluded that Rush! “captures perfectly the sense of spontaneous authenticity which makes a show one of a kind”.