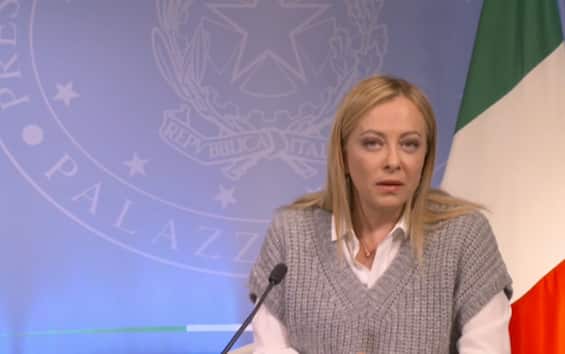 The premier spoke about the Budget Law in connection with the general assembly of Confindustria Veneto Est: “Most of the resources are destined for productive realities, there can be no welfare if there are no upstream generators of wealth”

“Economic growth is the country’s priority”: said Prime Minister Giorgia Meloni, speaking at the general assembly of Confindustria Veneto Est and speaking of the Budget Law. “One month after taking office, the government has already opened a table with the productive categories. We would have liked more time to discuss before the budget law but it was a race against time, in a very very short time. We had to write this maneuver without renouncing to outline a trajectory as clear as possible through the manoeuvre, giving an indication of the priorities of our action”.

“There is no welfare without those who produce wealth”

Those of the maneuver “are interventions that embody a social vision”, a vision that this government “shares with Confindustria”. upstream there is no one who generates wealth”, added Giorgia Meloni. The premier then specified that “Italy must go back to producing energy, what is needed must simply be done”.

“Those who produce should not be disturbed”

“The measures will lose all effectiveness if we fail to guarantee companies a different context from that found up to now in the relationship with the state and the government”, said the premier. “Since I took office, I have underlined two fundamental principles: not to disturb those who produce, and to put the confrontation with intermediate bodies back at the centre”.

“Ready to make choices, even with costs in electoral terms”

“If the industry is doing well, then the nation is doing well too: then it is up to politics to summarize and take responsibility. I intend to take them even if it costs money in electoral terms”, Giorgia Meloni said again. “We are ready to do what it is right for the nation and not for us. This is also demonstrated by the choice made on the Citizenship Income. Reaffirming with this choice that the government intends to rebuild a culture and a work ethic, and to do so together with those who do business and those who produce, It’s an important sign.”

“Italy hasn’t had an industrial strategy for too long”

“There are various objectives that we want to achieve, on which the relationship with your world is fundamental, starting with the industrial strategy”, said the Prime Minister, Giorgia Meloni. “We can also have a limited discussion on daily needs, but the the great challenge of confrontation today is to think about strategy: this nation hasn’t had an industrial strategy for too long”.

“Pnrr at risk if it is not resolved on expensive materials”

“We are carrying out a reconnaissance work by work, tender by tender” of the works envisaged by the Pnrr, “companies must know what will be done to be ready, to be found competitive”, Meloni said again. “Notwithstanding all the matter of the dear materials that we are facing because in the absence of an ability to know how to deal with this issue in depth, unfortunately the money from the Pnrr risks not reaching the ground”.