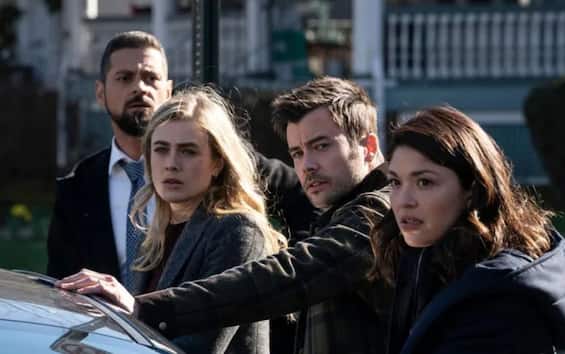 The fourth season of Manifest is about to arrive on Netflix (it will also be visible on Sky Q and via the app on Now Smart Stick) and online new posters showing the characters that will be the protagonists of the grand finale: Michaela, Zeke and Jared, respectively played by Melissa Roxburgh, Matt Long and JR Ramirez. A few days ago, the streaming platform also allowed audiences to preview the first seven minutes of the series’ new episodes, with a heartbreaking flashback that took a look at what happened after Angelina stabbed Grace and took Eden.

Manifest 4what is it about?

Two years after the third season of Manifest incoming episodes promise great emotions as i passengers are only 18 months from the date of their death. Manifest tells the story of some passengers on a plane who are presumed dead before their arrival in New York. In particular, the series follows the brothers Dallas and Roxburgh as they try to put the pieces back together and find out what exactly happened to them. In Season 4 “it will become increasingly clear to passengers that the calls are somehow of divine origin and it’s not just about them … it’s a gift or a burden, an opportunity to wake up the world and realize it’s all. connected and that we must all be better if we are to continue living in this world, ”Rake said during Tudum.

Manifest 4what will happen in the series?

The first ten episodes of Manifest 4 they will be released on November 4th to be followed by one second part of another ten in the following weeks. Two years after Grace’s brutal murder disrupts their lives, the Stone family is in chaos as devastated Ben continues to mourn his wife and searches for his kidnapped daughter, Eden. Consumed by his grief, Ben stepped down from his role as co-captain of the lifeboat, leaving Michaela to command it alone, a nearly impossible feat with every passenger move now being monitored by a government log. As the date of death approaches and passengers grow desperate for a path to survival, a mysterious passenger arrives with a package for Cal that changes everything they know about Flight 828 and will reveal the key to unlocking the secret of the Call on this thrilling, shocking and deeply emotional journey. “

Some curiosities about Manifest 4

Josh Dallas, who plays Ben, shared some trivia in an interview with Netflix Life: “Sometimes I think Ben could be the agent of the apocalypse, ruining it all because of the way he’s so tenacious … The first part of the season isn’t going to be easy. ”He also tweeted about Ben:“ To be honest he’s not in a great position ”and tweeted a photo from a funeral set, with the caption:“ Get ready ”. SpoilerTV and Netflix Life have also shared a few “leaked” episode titlespresumably of the fourth season, including High Flight, Final Descent, Full Upright and Locked Position And Mirage.