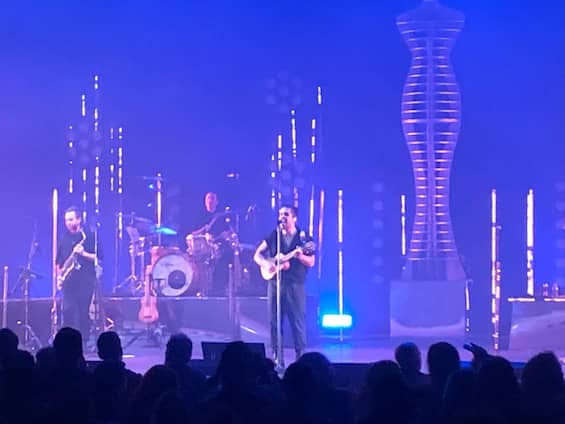 Totemic. The journey of Alessandro Mannarino toArena of Verona begins with a suspended time, the echo of the Drums and a vibration that takes us in Africa. And rightly as she sings… let’s leave it to the music. Powerful the idea of ​​taking off with the sub-Saharan continent punctuated by the percussion of three vestals that make beauty and life flow. The loops of Black River they are seductive, almost lascivious, and they travel and destroy the walls that some humanity would like to build. We are at the second song and the audience is already up, between a sabbath and a rave. The instrumentals are not just music but caresses that do not stop drowning in immense eyes of water. Open Heaven it is the strong signal that the sea does not end on the horizon, that life is one and brings love into the dark night, as is that of the Arena. Eventually comes the liberating smile of Alexander, comes the awareness that the Arena is his. The lineup has no dips, like an alchemist Mannarino he prepares his potions which he distributes like a sorcerer. To sing it is a lay prayer of devastating power, it alone burns all the apocryphal gospels, it is the new Esperanto, it is a universal language. The atomic loves and the melancholy beds of The Bank of New York they bring a stage colored by fluorescent segments and you really get the feeling that your heart can burst with happiness. How much emotion on Ale’s face already from the first notes of Marylou which is overwhelming, there is not a single person in the Arena who can not follow the vibes. For wine for women and for the cask it takes us into the bliss of Magdalene, where even Judas has a candid soul, made so by love: an original and Nabokovian rereading of a sacred and erotic epic. He returns to earth with Get Kisses which is a panacea to all the edges that everyday life puts in front of us. She it is a talking that poses an infinite existential doubt… how much cement does it take to hold a life together? The nails in the back that bring down the storm is a beautiful image, a fleeting moment of contemporary spleen. The totem lights up, the exorcism is done now we can go wild with Ballabylonia and with Lacrimosa serenade that brings the spirit of rave into the Arena.

Scent of the origins with Tevere Grand Hotel. By now the party is complete, all the schemes “between the thighs of the world pushed to the bottom” have been blown. With Scetate Vajò the sensation is clear that after this concert, Mediterranean music with its contaminations has entered a new golden age. The drift ofNoah’s Ark it reminds me of José Saramago’s island of Pietra, without a compass and without a route along the seas of migrants and humanity. Vagabunda And Bandida they take your breath away but do not lose the road that now comes to an end. Here we are with encores that are focused on the epic debut album Bar of Angerbut first it comes Fear, a motivational text of stunning beauty despite that tear on the pillow. And go crazy with Bar of Anger, Statte Zitto And I am drunk: it goes without saying that the Arena was a bedlam, between clumsy but appreciable attempts at pogo, slightly stunned couples who rubbed, unbearable shrill screams and out of note that not even at the passage of the Beatles at the end of the sixties and gentlemen (presumably ) very serious who lost their aplomb in sniffing, looking around, how good is the smell of the skirt. The greeting, accompanied by Mannarino’s tears of emotion and a long instrumental coda … crazy … is with Living the life: Alessandro greets us reminding us leave the house, smile, breathe hard you are alive, idiot! In short, the revolution starts from within us before it starts from voids. This concert is a story to tell. To be handed down.