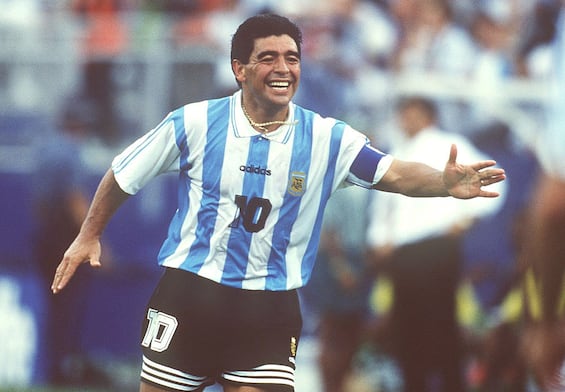 Gabriel Omar Batistuta he says it clearly in the trailer of the documentary Maradona: The Fall: “If someone had told you they really believed in a comeback of Maradona, would have lied to you”. No one expected Pibe de Oro’s call-up to the world championship, perhaps not even his own teammates. Yet Diego managed to perform the miracle, eventually being part of the Argentine squad at the USA ’94 World Cup. It seemed like the beginning of a fairy tale, it turned into one of the most controversial pages in the recent history of football. The whole parable of the latter world Maradona is told from the race against time to participate in the event up to its sad finale, giving space to different testimonies. The work of Angus Macqueen is a DAZN Original (also visible on Sky Q and via the app on Now Smart Stick) and is part of a mini-series of three documentaries created specifically to get as close as possible to Qatar 2022.

The death of an illusion

It was hot that day at Foxboro Stadium in Boston. It was June 21, 1994 and the locals were more interested in their own sports scandals than even smelling another one. The daring escape of the former football ace OJ Simpson iit interested the Americans more than that Argentina-Greece which kept the rest of the world glued to the television. The reason for so much general interest went beyond a simple World Cup match: for sports lovers who in those latitudes call “soccer” every match meant being able to attend one of the potential last performances of the strongest of all. Diego Armando Maradona was the leader and captain of a young and very strong Argentina. He had done it: he had one last World Cup to play and why not win. That day he proudly wore the captain’s armband and alongside him in attack was a young centre-forward, fresh from promotion to Serie A with Fiorentina. Gabriel Omar Batistuta made his World Cup debut scoring three goals but everyone from that match finished 4-0 will only remember the other goal. On two to zero Maradona duets with the sublime midfielder Fernando Redondo at supersonic speed. Then, as soon as he entered the area, he unleashed a very powerful shot from the edge that Greek goalkeeper Antonis Minou could only watch bagged into the corner. Maradona is back and the feeling is that he won’t be in America just as an extra. The haunted face during the exultation becomes cult (and also makes gossips speak) but that day no one has room in their head for bad thoughts: it just seems like the beginning of a fairy tale or at least the closing of a circle.

Sad, no so lonely and sobre todo final

Maradona: The Fall tell a story that has that goal as its epicenter. After the goal, in the following match with Nigeria, the champion acclaimed by the crowds was drawn in the anti-doping test and tested positive for illicit substances. It was the end of the competition for Maradona but also the definitive end of an important chapter in his life: a controversial disqualification had deprived the former Napoli player of the possibility of a last dance with his Argentina and from then on there will only be room for the regrets, doubts and recriminations. The trailer of the documentary shows those who have never believed in the positivity of Diez, thinking it was all a conspiracy, but at the same time it also gives space to the point of view of those who believe that Maradona in general has been forgiven too much. What is certain is that, as recalled by that Claudio Caniggia who kicked us out of their home World Cup four years earlier, the story at USA ’94 would have been different for Argentina without that affair to disturb the spirits of the Selección.

Maradona: The Fall it also investigates what happened before the tournament, recounting the struggle of an out-of-shape icon to regain his stage. A battle accomplished with hard training, designed to make you lose 12 kilos and at the same time ward off vices and addictions. That Pibe de Oro was already a minor version of himself, forced to find himself at home at Newell’s Old Boys after the gray parenthesis in Seville. Yet Diego Armando Maradona made it: he made his dream come true and the longed-for “last dance” went great, at least until after that goal against Greece.

Presenting the documentary, the director of Maradona: The Fall Angus Macqueen spoke of what happened then: “The image of Diego Maradona running like mad towards the camera during the USA ’94 World Cup is emblematic: an imperfect genius, a man who says he is back in top form but who seems totally out of control, ravaged by demons and in the throes of drugs. A legend on the verge of decline. Maradona: The Fall challenges the established narrative: as always, when it comes to Maradona, what you see is not always the full picture”. Macqueen’s work is part of a series of documentaries that the DAZN platform (also visible on Sky Q and via the Now Smart Stick app) launched around Qatar 2002. The choice is to try to give a different view to history, also showing the suffering and gray spots in the history of the champions. We have also seen it in The phenomenonthe documentary about Ronaldo Brazilian already available for viewing and forming with Maradona: The Fall and Green Lions (about Cameroon in 1990) a triptych designed specifically to accompany fans to the World Cup. We will never know what could have happened after that 2-1 victory against Nigeria which was Maradona’s last appearance in a World Cup. Certainly even that question mark eventually contributed to enriching the legend of the D10S of football.