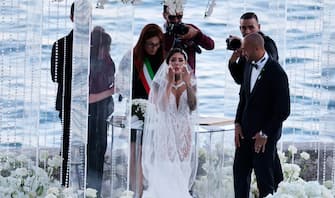 The Olympic athletics champion got married on Saturday 17 September with a civil ceremony in Gardone Riviera in Bresciano, on Lake Garda

The sportsman and Nicole Daza are husband and wife. The fastest man in the world has joined in marriage with his historic girlfriend, mother of two of his three children.

Him in a black tuxedo, patent leather shoes and round lens sunglasses; she wrapped in a white dress with lace up to above the knee with a four meter long train and a floral hair pin studded with rhinestones.

Before going to the chosen place, Marcell and Nicole were applauded, in separate moments, at the old port of Desenzano when they then boarded a motorboat. The newlyweds on September 24 will leave for their honeymoon in Bali and the Maldives.

Before the wedding, the Olympic champion greeted the mayor of Desenzano Guido Malinverno, under the eyes of over one hundred people who applauded him.

Go to the special MODA of SKy Tg24

“Happy birthday to the best part of me. I love you to death and soon we will fulfill our dream”. So the 100-meter Olympic champion turned on Instagram to his Nicole, mother of two of Marcell’s three children, 3-year-old Anthony and Meghan of just over a year.

The most beautiful wedding dresses of Hollywood stars. PHOTO