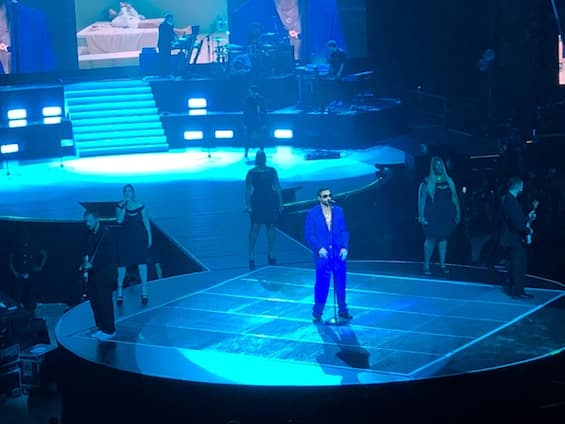 And while everyone is looking at the stage he, like Moses, cuts through the ranks of his army and, dressed in blue, arrives on the stage along the most difficult road. But the army touches him with its eyes and accompanies him on the proscenium with the heart. Where he introduces the Palabam of Mantua into the world of him with Change a Man. Three backing singers surround him, the guitarist and the bassist, while watching his back, scrolling on the videowall, the images of the audience, all people who have the courage to Human beings. To dispel any doubts, he introduces himself: “I am Marco and I am very, very happy to be here”. Dark glasses to defeat anxiety, because if there is a certainty with Marco it is that the evenings are totally No Stress. If I wonder what I want… I think of Marco who sublimates the Village People in his look, and in the contemporary world gives a new skin. He, jacket open on his bare chest, moves like a Tony Manero 2.0. But, I assure you, he is iconic, overwhelming, contagious. Mathematics has never been my forte but I think it’s the 10th gig of him I’ve seen (at least) and every time it’s like reading the sequel to a hypnotic saga. The added value, and it is evident just before he enters the ring Muhammad Ali, is the balance between music and scenography. By the way, the funky-blues of the boxer Alì knocks out the public. In the first round.

You expect American Psycho and Patrick Bateman when the rhythm starts and instead Marco is followed by images that remember Birds by Alfred Hitchcock, Murnau’s sprawling hands and The Corpse Bride by Tim Burton. Here we are in the most lysergic oneiric ever married to the punk of The Damned and The Stranglers. Let’s change fate with Believe me again, accompanied by the Palabam choir who looks at him in delight when he reclines on the stage as if it were a triclinium. The accompanying images I will trust you they remember a little Yellow Submarine but the awareness is that, at least tonight, there is nothing to fear! Maximum attention to All my memoriessong that belongs to the new album Materia (Leather): to emphasize that a new chapter has begun here is an explosion of streamers. Avanspettacolo pure the intro of Light and in fact the caption speaks of a return to the future of the Seventies with the presentation of the Motown-style band. To climb the world and defend insecurities, he could only be dressed in red, useful for protecting this fragile heart …Protect yourself from Me. Hot is hot and yet we do not spare a few games of voice to take us by the hand and accompany us in one Sad song: incidentally the song is crazy! He is visibly moved before accompanying us in this song and already echoes as he descends the stairs. It is, his sad song, destined to become a catchphrase. Magna cum laude. The stool arrives (but it is a celia because it disappears immediately) for the Words in a Circle that transform the evening into a happening. Now if we look around the world falls apart, and unfortunately it is not a metaphor, but Marco’s poetics remain, which takes us into the soul of what it is for humanity. The essential. Let’s go back to the upcoming album and let’s go In the city with a quote from Battisti: leaving you is not possible.

The invention of a square igloo appears on stage and tells us about our planet with seductive images, he is locked inside, he seems in a cage but he is simply protected by a galaxy in You know that. Look is the moment that unites James Dean with Marlon Brando, the savage on the harbor front who incites the Hola which closes with an acute tenor. What used to be a refuge and protection was skin, now it becomes an elevator that attracts the oceans, it is Cape Horn where the Pacific and the Atlantic meet and I really loved you. Stay up there to come and find us Two thousand times even if we are distant but warm between lapilli and lava. The ending is a DJ set that enhances ours Warrior. The applause is now uninterrupted and exclusively the rock discharge of But tonight manages to dampen it but only to give breath to the many voices of Palabam that despite being a human shroud invites us to be Ready to run and to be sure Marco yells “I want to see you all standing”. I’m waiting for you is the apotheosis of a crazy evening and there are still two songs to go. Marco gives another new song, which in Materia (Leather) is shared with Samuele Bersani: it is Once again. He asks to turn on the lights, he wants to see the audience in the face and whispers that “even the most beautiful things end”. Then, in fact, he incites the army with a wild one Once again and the ending can only be with Good life. Which is more than just a wish. It’s a promise.