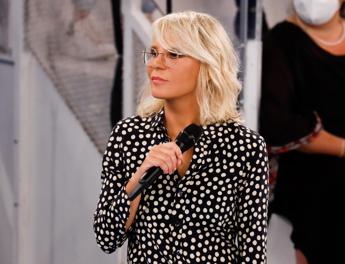 The presenter, author and producer dominates the scene, a unique case in Italy and perhaps in the world for the number of programs she conducts, writes and produces

Candy always at hand even during live shows, cigarettes during breaks, which in recent times has become electronic, sport two to three times a week, including padel, tennis and crossfit, and above all a lot, a lot of work. Maria De Filippi turns 60 on December 5 and even that day, we can bet, she will spend it between an editorial office and a recording studio. On the other hand, his is a unique case in Italy, and probably also in the rest of the world, of ‘woman palimpsest’, for the number of programs she deals with as author, host and producer.

For years he has been conducting the Saturday evening program of Canale 5 for the entire TV season, between ‘Tu si que vales’, ‘There is mail for you’ and the evening of ‘Amici’, dominating the ratings, but also leads two day time battleships such as the school strip of ‘Friends’ and ‘Men and women’ in its various forms, between young and old suitors. But not only: as a producer she takes care of her husband’s programs, ‘The interview’ and the ‘Maurizio Costanzo Show’. Then, in good weather, he writes and produces ‘Temptation Island’, which he hasn’t run for a while and which was announced at the end of last August that he will not continue. But the desire to experiment is the same as always and so for some time now on Canale 5 the announcement of the casting for the new ‘Last stop’, centered on protagonists with love stories “at the end of the line”.

Maria, whose stylistic figure is linked to her great ability to tell and listen to the stories of the protagonists of her programs, has in fact been soul and brain of Fascino – Produzione Gestione Teatro Srl, a television production company 50% controlled by Rti Spa (which is 100% controlled by Mediaset Spa) and 50% by the host itself, given that in 2008 Maurizio Costanzo decided to sell his share to his wife as well. And it is in the office in the Prati area and in the Titanus Elios studios in via Tiburtina, from which almost all of her programs are broadcast, that Maria De Filippi spends most of her days, between meetings and presentations. Attentive to the evolution of the media scenario, with younger viewers increasingly inclined to consume audiovisual from PC or smart phones, in 2013 she also founded Witty Tv, the platform that refers to the programs produced by the company and makes their contents available online.

Born in Milan on December 5, 1961, from a family that she herself described in the interviews as rather “severe” (her mother, a teacher of Italian, Latin and Greek, was very keen on her academic performance), she moved to the school at the age of 10. Oltrepò Pavese and Pavia took both the classical high school diploma and a law degree. After an attempt to pursue a career as a magistrate and various experiences in legal offices and as a text (and thesis) editor, in 1989 the decisive meeting, destined to mark his working and private life: during a conference against music piracy, organized in Venice by the company he works for, knows Maurizio Costanzo, who offers her the opportunity to collaborate with him and, at the end of the same year, becomes his assistant. Shortly afterwards, the sentimental paths of the two also came together, giving life to one of the longest-running partnerships in the world of entertainment in recent years. In August 1995 they will be married by the then mayor of Rome, Francesco Rutelli. In 2002 the couple took over Gabriele, at the time ten years old, whom they will then adopt in 2004 and who currently works with them in the television sector. Together, in May 1993, De Filippi and Costanzo also suffered an attack by the Cosa Nostra, luckily unsuccessful, from which the presenter took many years to recover.

The debut at the conduction of Maria De Filippi is dated September 26, 1992 (next September will therefore be 30 years spent in front of the video). That year Maria took over from Lella Costa in the conduct of the talk show of Canale 5 ‘Amici’, broadcast in the early afternoon of Saturday, of which she will also become the author in the second season of her conduct, alongside Alberto Silvestri.

Since then, the challenges undertaken and won by ‘Maria La Sanguinaria’ (as Roberto D’Agostino calls it ironically on the ‘there is none for anyone’ that often characterizes his descents in the television field) have been endless. To mention only the milestones: ‘Amici’ has transformed over the years and has become a real school and hotbed of talent, as well as a Saturday night show, and it is the longest-running talent show on Italian TV. ‘There is mail for you’, born in 2000, is the longest running people show on Italian TV. ‘Men and women’ was born in 1996 and is still on the air, even in the ‘senior’ version which features mature and elderly people. And between one experimentation and another, between a vip edition and a celebrity, the recognition of the centrality of De Filippi in Italian TV is also testified by the fact that it has been hired several times by the most important event of Rai, namely the Sanremo Festival. In 2009, Paolo Bonolis wants her next to her for the final evening of his Festival, which was won by Marco Carta, a character born in the school of ‘Amici’. In 2017, Carlo Conti called her to lead the entire festival. In 2020, the first Amadeus festival with Fiorello evokes her every evening in the imitation of the Sicilian showman until she connects live with the presenter on the last evening. In short, while streaming platforms advance and blow spectators to linear TV, at 60, Maria De Filippi is still the essential character of Italian TV.