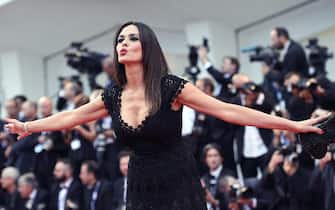 The Sicilian actress was born in Messina on July 27, 1968. In her career, in addition to many films for TV and the big screen, she also had important experiences as a model, film producer and entrepreneur –

Cucinotta is known and loved all over the world. At just over twenty years old in 1994, it was launched by “Il Postino”, the film by Massimo Troisi and Philippe Noiret. She then she became an international diva, also chosen as Bond Girl –

Naples remembers Troisi 40 years after the birth of “La grorfia”

The actress she told herself to the microphones of Corriere della Sera, a long 360-degree interview in which she revealed some details of her private life, starting with the famous Miss Italy contest 1987

Also in the interview with Corriere, the actress talked about her beginnings in the entertainment world. “I signed up for the competition at 16, dad didn’t let me go. So I tried again at 18 just turned. I left Messina by train at 8.30, I had mom’s focaccia and some apples in my bag. I didn’t win but I arrived in the final. I was noticed by an agency in Milan. “If by chance you pass by in the city, get in touch”, they proposed.

After a book made by his brother to save money, he got the first audition for Back all! Raidue cult program: “And it was a disaster. I presented myself in front of Renzo Arbore, Alfredo Cerruti, Arnaldo Santoro, Nino Frassica, you will understand, they made fun of me without mercy. “What can you do?” “Nothing”. I was a goofy. My heart was in my throat and my ears were purple. In the end, perhaps they chose me out of compassion, luckily I was photogenic ”

However, the real leap into Olympus took place with Il Postino: “My father was a postman, as was my brother, my sister, my brother-in-law and my niece. In reality, I too had won the competition and a three-month contract, but I gave up, by now I had taken my path. Dad held my nose for years, until the film with Massimo Troisi: somehow I had realized his dream “. It was a part that Maria Grazia Cucinotta obtained thanks to her friendship with Nathaly Caldonazzo, Troisi’s girlfriend at the time

James Bond, the museum dedicated to 007 opens in July in Austria

The actress decided to move to Los Angeles, where she remained until 2005: “To be honest, Hollywood is an anonymous sign on a bare hill, even ugly, nothing special for me, coming from Rome, with the Vatican and the Colosseum, but the Americans as an organization are unparalleled and meritocracy really works there: they don’t care who you are and where you come from, if you are successful you are successful and everyone is with you. I studied and learned a lot ”

Woody Allen, all the news

I’ve always had the complex – the actress always told me, at 13 I was already like that, what a shame, I couldn’t wait to reduce it with an intervention, then I gave up, maybe I wouldn’t have had the same success, but I didn’t it never seemed beautiful, too bulky, hunched over my shoulders to hide it. Besides, it’s hard to be taken seriously, nobody looks you in the eye. “Ah, but you are also intelligent”, is a phrase that I have often heard ”

Venice Film Festival 2018, everything you need to know

Then came too “007 – The world is not enough” with Pierce Brosnan, the film that «Humanly gave me the most. In fiction I was a killer hired by Robert Carlyle, an extraordinary but very small actor next to me who looked like a giant, with huge hands. Fortunately, the scene together was cut. And then I met Barbara Broccoli, the producer, still one of my best friends today ».

Cucinotta (2007 photo), as well as for her career as an actress, is known in the USA (where she lived for some time) also for her experiences as a producer (for example in “All the Invisible Children” and “Last Minute Morocco”) –

But the actress (photo from 2007) also became a film producer in China, when that immense market had not yet been discovered by anyone –

The 50th birthday party, # mizzica50, will be held on July 29th on the Appia Antica. “It was meant to be a surprise party, but I immediately discovered my friends who were organizing”, said Cucinotta (photo from 2014). Then he confided: “At 50, after maybe you spent years making others love you, start to love ourselves is a good new beginning. The only recipe I know for beauty and to feel good is to always love each other, at any cost, respect each other “-