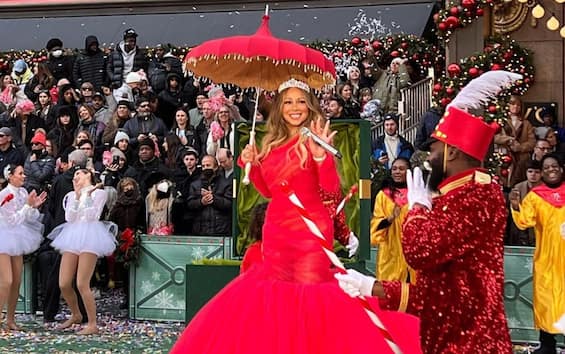 The wonderful sunshine that lit up the streets of New York for the traditional Thanksgiving Day Parade organized by Macy’s department store it wasn’t enough to shut down the chatter of the Americans who, this year, have staked the finger at Mariah Careyspecial guest of the 2022 edition of the event.
The singer-songwriter, who appeared on the stage of honor with a super Christmas red look, did not completely convince the public who, on social networks, harshly condemned his performance in playback. Carey fans, who promptly came to the singer’s defense, opened the debate on the web.

The controversy on the net for the performance in playback

The controversy over the Macy’s Thanksgiving Day Parade underscores, if any were needed, how central this event continues to be in the lives of Americans who have been waiting for it every year for nearly a hundred years – the first was held in 1924.
Collective event of the stars and stripes life par excellence, the parade is appreciated throughout the country and is followed by the majority of Americans on TV and live streaming. It was precisely the spectators from home who raised the criticisms against Carey, judged as a lackluster presence. According to some, she, who proclaimed herself queen of the holidays, would only have a festive look.

The most ferocious have criticized both his stillness at the center of the stage (the singer would have remained stationary on stage leaving all the choreographies to the dancers who accompanied her), that her playback performance, unexciting and uncared for. From home, the audience noticed that the singer was unable to synchronize well the movement of her lips on the notes of the famous All I Want For Christmas Is You.

The total red with the tiara for the “Queen of Christmas”

While Mariah Carey has pledged to share the best moments of her Thanksgiving with her Instagram followers, the social debate about her performance is still open, with the singer’s fans ready to defend her by pointing out that the parade performances are very often in playback , logistical cause of the event being held outdoors in the midst of great confusion (normally, hundreds of thousands of people participate).
The singer did not care about the tweets and on social media she published some videos and some photos of her special afternoon for which she prepared a triumphant look.

The 52-year-old sported a flashy red dress in tulle, a model made for her by Christian Sirianothe designer loved by the stars.
With a one shoulder neckline – but with both sleeves – the dress has a mermaid design, fully draped with sheer over the skirt and very voluminous hem. To complete the queen-like look, Carey wore, of course, a Swarovski tiara and throughout her appearance she held up a walking umbrella, red and decorated with sparkling crystal drops.

Mariah on TV for the Christmas special

After her release, the singer put her stage costume back to go back to black as a diva, another look visible on Instagram where a video with the details of her Thanksgiving dinner has just appeared. Even to be at the table, Carey never disappoints and arrived with sunglasses, in a short dress, platform sandals and a biker-style jacket completely covered in sequins.

All we have to do is wait for the next effective looks with which the “Queen of Christmas” will perform in her concerts in December, in Toronto and at Madison Square Garden. The live shows will be recorded and edited in an unmissable special, Mariah Carey: Merry Christmas to All!two hours of music, on TV starting December 20 on CBS and streaming worldwide from Paramount+.