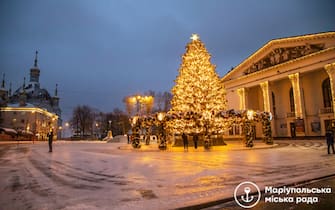 This is one of the latest photos published on the Mariupol Municipality website. Show the Piazza del Teatro – the one that was bombed – before the war started. Like many other places in Europe and around the world, a typical Christmas tree had been placed here and the main buildings had been festively lit up. There was a blanket of snow on the ground and even the roofs of some buildings were white

WATCH THE VIDEO: Ukraine, the difficult evacuation of civilians from Mariupol

This is another image posted on the Municipality website and, like the others, it helps us to understand what Mariupol was like before it was attacked and bombed. According to the mayor, Vadym Boychenko, today the80% of the residential buildings would have been damaged and destroyed

War in Ukraine, bombs on Mariupol: theater used as a refuge by civilians destroyed. PHOTO

According to reports from Il Sole 24 Ore, the city mattered 430 thousand inhabitants: more than Bologna has. The BBC reports that at the moment there are 300,000 and their living conditions are very bad: there is a lack of basic necessities, there is no running water or heating. Those who have not managed to escape cannot do so because Russia had conditioned the opening of a humanitarian corridor to its surrender, which however did not arrive

Besides being a very populous city, Mariupol was also a very important center. The Corriere della Sera stresses that it is the second port after Odessa and precisely for this reason its hold would be strategic for Russia

The EU High Representative for Foreign Affairs, Josep Borrell, said that the city is “completely destroyed” and that what is happening there is “an immense war crime“. Ukrainian sources report that bombs fall here every ten minutes and that some residents are forcibly deported to Russia. An unimaginable situation last August 24, the day this photo dates back to. Independence Day was celebrated.

This photo is from a few months ago: it was April and it showed a city in bloom. The photo is part of an album that was titled “The wait is over! Sakura bloom in Mariupol”

This image dates back to 2020 and was uploaded to an album called “Bright weekend”. It shows some people wandering around the stalls, talking to retailers and buying various products at an event known as Local farmer fest

From that collection also comes this image that shows some people sitting on a lawn with their own mats and in gymnastic clothes: a sign of a life that then flowed normal and in which the thought of death was not as recurring as it is now. “Everyone in this city is waiting for it. I just wish it weren’t so scary,” a citizen, Nadezda Sukhorukova, said via Facebook. Her testimony was relaunched on twitter by the Ukrainian journalist of the Kiev Indipendent Anastasiia Lapatina

As mentioned, Mariupol is a city overlooking the sea. When no one was thinking about war yet, it also happened that people gathered in Beach to take part in sports competitions like this one

This photo gives us another glimpse of normality. It shows some people sitting on the benches and others cooling off in the fountain on a sunny and probably very hot day

Here we are obviously in another time of the year, with people skating on an ice rink

That lightheartedness is gone today. The offensive on the city continues and it could last a long time. The head of the self-proclaimed Donetsk People’s Republic, Denis Pushilin, quoted by Interfax, said: “I am not so optimistic that it takes two or three days or even a week to close the matter. The city is big.”

In the city, not even hospitals were spared. These are the damage caused by attacking one pediatric facility. Ukrainian President Voldymyr Zelensky called it “an atrocity”