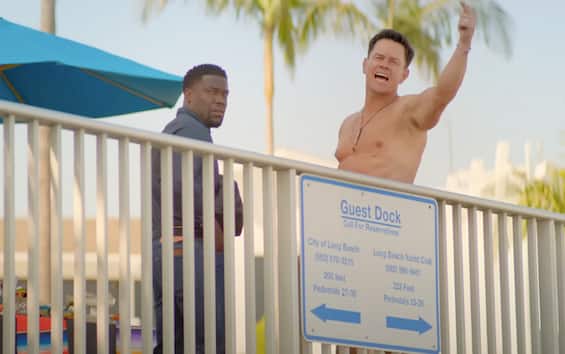 Mark Wahlberg made a burning revelation: the actor had to remain totally naked for twelve hours non-stop on the set of the film “Me Time – A weekend of my own”. But even more burning than the news regarding the actor’s Adamic costume is the fact that Wahlberg admitted that that first day of shooting was not at all pleasant for him.

“I was not at ease”, confesses the star during an interview released at the end of August a The Hollywood Reporter.

The reason why it sounds strange is the tone of voice by Mark Wahlberg? Because we are talking about an actor famous for his innate comic vis not only on the set but between takes this interpreter rarely let himself go to confessions and revelations not moved by laughter. And that don’t move a laugh, too.
Yet this time his words are not at all ascribed to comedy but, on the contrary, they make us reflect on the suboptimal working conditions that sometimes even Hollywood stars have to face.

“I was 12 hours naked on the set, I was not at ease” are the words pronounced by Mark Wahlberg. If they were said by an actress, for many people they would sound even heavier, however hearing it from an actor who usually tends to make us laugh still sounds unpleasant.
The actor is the protagonist – together with his colleague Kevin Hart – of the comedy “Me Time – A weekend of my own”, available on Netflix (also visible on Sky Q and via the app on Now Smart Stick). For the first day of the take he was for several hours (a full day, according to him) totally naked on the Long Beach pier.

Although the aforementioned film is a funny and enjoyable comedy, this anecdote that the actor has been divulging a few days ago casts unpleasant shadows on a film that should have only made us laugh.

The actor of Transformers confessed to The Hollywood Reporter the following: “The first day I had to stand completely naked in Long Beach on the dock for 12 hours. It was embarrassing for me. Every now and then someone threw me a bathrobe or a towel but I was not at ease ”. And he adds: “The second day was great because I got my clothes back on. The first was very hard. I was wearing only a pair of sneakers. It was embarrassing, but other than that, everything was fine. It was a fun environment. I have never laughed so much in my life ”.

Despite the second part – the one concerning the funny environment and the fact that he has never laughed so much in his life – sweeten the first statements a bit, there is still a bitterness in the mouth.

The US magazine The Hollywood Reporter met the star of the new Netflix comedy at the Los Angeles premiere, where Wahlberg hinted at vain attempts to keep a straight face while starring opposite Kevin Hart: “I’ve never laughed so hard in my life,” he told the reporter. Alex Cramer.
Cramer defines “Me Time – A weekend all to myself” as an “extravagant family comedy”.
Written and directed by John Hamburg (I Love You, Man), the film centers on Sonny (Hart), a tense house father who rediscovers his wild side when he steps out of his comfort zone with his fun-loving friend Huck (Walhberg).

“Anyone who peeked at the trailer for Me Time (which we show you in the video at the bottom, ed) has certainly noticed that the film features Wahlberg’s fuzzy rear in what marks his first staged nude in years, ”writes Alex Cramer on THR. And he opens the confession by underlining: “The star of Boogie Nights he joked that it wasn’t easy to go back to his revealing roots ”.

Also in the cast is actress Regina Hall, who admitted that it was the attraction of being able to work with the two co-stars that made her want to be a part of the film. “I’m a huge Kevin fan. I’m a huge fan of John Hamburg and I’m a huge fan of Mark, “explained the actress, who plays the wife of Hart’s character.” I really enjoyed working with them because we had so much fun. “

Below you can see the official trailer of the film “Me Time – A weekend of my own”, which also features the first nude on stage by Mark Wahlberg.