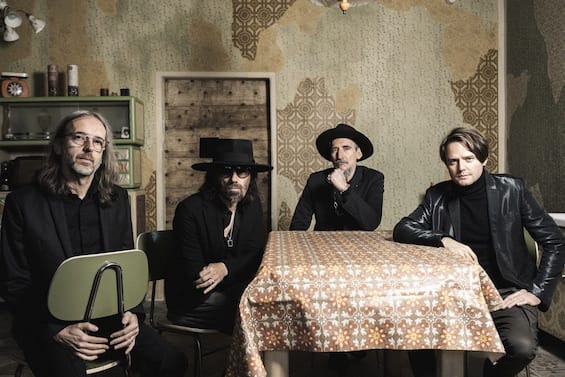 Start Sunday 2 October from Sicily the tour of Marlene Kuntz “KARMA CLIMA”a broad and profound work, an artistic and social project that combines music and environmental protection, as well as the new album of the band (artistic production by Marlene Kuntz with Taketo Gohara), out September 30, 2022 for White Wing (distributed WARNER). Pre-order: https://found.ee/mk-karmaclima-album. After PALERMO (Mercury Festival, October 2), the tour will touch at the moment ROME (Monk / MArteLive, October 16), TREZZO S / A (Live Club, November 4th), PORDENONE (Capitol, November 5), TURIN (Supermarket, November 11), BOLOGNA (Estragon, November 13) e VERONA (The Factory, November 19). In the lineup, in addition to the most popular songs from the repertoire of the Cuneo band, also some songs taken from the new album. Tickets are available here: https://marlenekuntz.com/live/

“KARMA CLIMA” is the voice of Marlene Kuntz on the themes of sustainability and creative and performing art. The album was written and recorded in Piedmont, between October and December 2021 during three artistic residencies (Viso a Viso Cooperativa di Comunità di Ostana, Birrificio Agricolo Baladin Piozzo and Borgata Paraloup) during which the Marlene Kuntz entered closely contact with the communities that live in those places, creating a music factory open to the public.

The nine tracks on the album are each a cry, an awareness of what is happening to the planet.

The production process of “KARMA CLIMA “ entirely dedicated to the need to open a dialogue and concrete operations on climate change, it was included in the Symbola Report “I am culture” (https://www.symbola.net/ricerca/io-sono-cultura-2022/)

We find “KARMA CLIMA” in the chapter “The cultural innovation that will come”, as a successful case history, an emblematic example of the process that – we read on p. 52 of the Report – “must lead cultural institutions to change, at least in part, their positioning and ability to dialogue with other players in the supply chain and other production sectors “.

He is currently on the radio “LIFE ON MARS”, passage that highlights the crazy selfish attitude of those who think they can save themselves from the climate emergency, perhaps seeking refuge on Mars, a recurring hypothesis of the few rich people on the planet.

The text is deliberately ironic and the tone caustic. The video (https://youtu.be/gF_G2JcGKTQ), directed by Michele Piazza, shows the useless selfish madness through images of the Val d’Ayas scenery, in particular the blue lake. A dance on the end of the world, among the rocks, in the middle of the mountains. A territory that desperately shows man’s wounds to the environment with the presence of a river that feeds on the water of the glacier that is sadly melting.