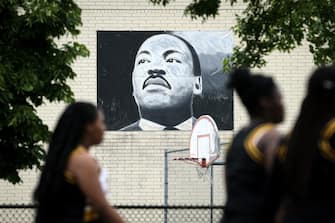 Every third Monday of January, in the United States, it is celebrated on Martin Luther King Day. The federal holiday was established to commemorate the Protestant pastor, leader of the civil rights movement, born January 15, 1929 in Atlanta

WATCH THE VIDEO: The story of Martin Luther King

The party was established on January 20, 1986 following a law signed in 1983 by then President Ronald Reagan. In the photo: the monument dedicated to Martin Luther King, inaugurated in 2011 inside the Tidal Basin, an artificial reserve in the District of Columbia, in Washington

The story of Rosa Parks and the rebellion against racial segregation

The shepherd was assassinated on April 4, 1968 in Memphis and since then, despite a great movement of opinion, it has taken several decades to dedicate a day to the champion of civil rights

ALL THE NEWS ON MARTIN LUTHER KING

Despite the fact that the law was passed in 1986, only in 2000 it was celebrated by all states. In the photo: a celebratory shirt worn in 2018 by the players of the NBA team of the New Orleans Pelicans on the occasion of Martin Luther King Day

The party is the first dedicated to an African American citizen. For decades, the figure of Martin Luther King was considered controversial by a part of American politics. The democrat Bernie Sanders also participated in the traditional march that is organized every year in 2019 (photo)

In 2021 the anniversary has taken on a particular meaning: last year was in fact marked by protests of the Black Lives Matter movement against discrimination and US society

The event that triggered the protests was the killing of George Floyd, African American citizen of Minneapolis, May 28, 2020. Floyd was suffocated on the knee by a policeman, who had stopped him

The video of Floyd’s death soon went viral on the net and thousands of people all over the world took to the streets, as well as sharing the phrase on social networks “I can’t breathe”, that the man had pronounced on his deathbed

The episode brought back the spotlight the issue of racial discrimination in the United States. “53 years after Martin Luther King’s death, the promised land where blacks could find their place on Earth remains a broken promise,” wrote the magazine’s columnist. Forbes Douglas Haynes

One of the most controversial administrations in American history, that of Donald Trump. The president did condemn the conduct of the agent responsible for Floyd’s death, but he did not spare attacks on protesters, going so far as to define Black Lives Matter as a symbol of hatred.

In 2022 the anniversary falls on Monday January 17, under a new administration, that of the Democrat Joe Biden

Born in Atlanta, Georgia on January 15, 1929, Martin Luther King Jr represents, not only in the United States, one of the most charismatic figures in the fight against racial segregation

Because of his militancy, the Protestant pastor he was arrested about 30 times, also suffering four assaults

During one of the detentions he wrote “Letter from a Birmingham Jail”, which became the manifesto of the civil rights movement

On August 28, 1963 in Washington, in front of about 250 thousand people, Martin Luther King pronounced the famous speech that begins with “I have a dream” (“I have a dream”)

Also thanks to his speeches, his demonstrations and his activism, in 1964 in the United States the “Civil Rights Act”, the civil rights law

In the same year, King won the Nobel Peace Prize

The April 4, 1968 he was killed by James Earl Ray while standing on the balcony of a Memphis motel room