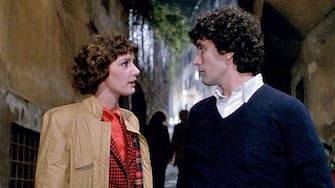 Marta (Fiorenza Margheggiani): “When there is love there is everything.” Gaetano (Massimo Troisi): “No, she’s in good health!” (I start again from three)

Gaetano: That is, if I am telling you that I am leaving, I am leaving … and I vaco a little, Rafe ‘, nun’ nce ‘to do cchiù! That is, what has been has been, enough! I start again from three!

Massimo Ttrosi, the comedian of feelings

Gianna: Anyway, that film I must say was terrible, I was really … scared. But listen, if they tortured you like the guy in the movie, would you have talked? Gaetano: For charity! I didn’t even need them to torture me: it was enough for me that they told me sully … for example …: “Look, if you don’t talk … maybe … we’ll torture you”, I immediately spoke, wrote, that is, if they did not understand I did a drawing … (I start again from three)

Gaetano: “What did St. Francis do, did he always talk to the birds? Always ‘int’ ‘and’ rrecchie ‘and’ these poor beasts who chille vulva to be ‘nu not calm, no … In my opinion, look, because of the fault’ and St. Francis was born ‘to migration’ and the birds. ” (I start again from three)

Riccardino: “Mammina says I have the complexes!”
Gaetano “: Complex? You have an entire orchestra in mind!
(I start again from three)

Anna (Giuliana De Sio): I like making love with you. Vincenzo (Massimo Troisi): Me too. Anna: Then why don’t you ever tell me? Vincenzo: What does this mean? If I do it, we do it accussì, it means that I like it, right? Anna: Oh no. Vincenzo: How not? No. Have you ever seen me being hammered on my hand or cut off my ear? No. Do you know why? Because I do not like it. It is normal, Without which one has to say all things. Some things go by themselves. If one understands he understands. (Sorry I’m late)

Tonino (Lello Arena): Vincé, I kill myself, better one day as a lion or 100 days as a sheep. Vincenzo: Tonì, what can I do for pechere or donate lione, do 50 juorne as a teddy bear. (Sorry I’m late)

Mum: Vince ‘, life must be taken as it comes.

Vincenzo: And what do I know ‘stupid? Do I take it as you go? I take it as it comes … but it always comes to me ‘na sewer, look what a combination!
(Sorry I’m late)

Vincenzo: “One who keeps a coffee machine for one person is most lonely.” (Sorry I’m late)

Massimo (Massimo Troisi): “Nun is overo, I don’t want to bitch Napule, I like ‘a pizza,’ or mandulino … and then bitch Mantua, Rovigo … I know ‘gghiut’ in Rovigo with my father ten ‘ann’ ago … I know ‘turnat’ is sim ” to herself … bitch Rovigo! ” No thanks, the coffee makes me nervous

Massimo Troisi to A Leonardo da Vinci: Oh but I miss a broom you understand .. (We just have to cry)

Saverio: What if you say to Ugualos? [Parlando in spagnolo]
Mario: … Olé … ”

Camillo (Massimo Troisi): “One is inventing a medicine against hair loss and against pain in a country where one without hair says that the way to salvation is pain.” (The ways of the lord are over)

Camillo: “To get the trains to arrive on time, if we want, [Mussolini] there was no need to appoint him head of the government, it was enough to do it stationmaster. “(The Lord’s ways are over)

Camillo: “I never read. I don’t read books, things … Weak … What am I starting to read now that I am big, that books are millions and millions? I never reach them, do you understand? Weak I am one to read, they are millions to write. ” (The ways of the lord are over)

Pulcinella (Massimo Troris): “We always blame hunger. Complaints, cowardice, crimes … whose fault is it? Hunger. It would be true if those who are not hungry behaved well, but I don’t think so.” (Captain Fracassa)

Tommaso (Massimo Troisi): “Mamma mia … I look, I don’t know that I am against marriage eh, that I don’t know … I just don’t know, I believe that in particular a man and a woman are the people least suited to marrying each other, too different ”

Tommaso (Massimo Troisi): Ah, you have decided to buy together … Why? What, are you having problems? Cecilia: (Francesca Neri) “Problems”? No because? Thomas: But if someone is fine together, I don’t understand why he has to go and get … One says “We live together” when it means that things are not going … In fact, when they get worse he says: “Why don’t we get married?”. .. That you really begin that you can not take it anymore: “What do we do with a child?”. And when in the end you hate each other but are old, you say “What are we leaving right now that we are old ?!”. That is the path. (I thought it was love but it was a gig)

Vincenzo_ “Why are you all so honest with me ?! What have I done wrong to you ?! Who asked you anything? These are not things that are said in the face. These are things that must be said behind the person concerned. They are always been said behind “(I thought it was love but it was a gig)

Mari (Massimo Troisi): The poem does not belong to whoever writes it, it belongs to whoever serves it (Il postino)

– Mario: Don Pablo, I have to talk to you, it’s important … I’m in love! – Pablo Neruda: Oh thank goodness, it’s not serious, there is no remedy. – Mario: No no! What a remedy, I want to be sick (Il Postino)