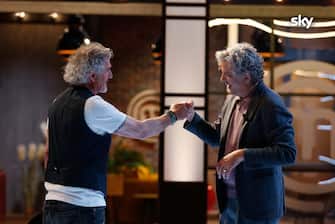 Before a new Golden Mystery Box, the class greets the competitor Bruno who has the worst in the ballot with Christian and leaves the scene

Under the Golden Mystery Box, the contestants find two different ingredients, named by the judges the devil and the holy water

MasterChef 11, Anna says goodbye to the dream of reaching the final. The interview

Hands up! The Golden Mystery Box is over!

MasterChef, out of Andrea and Nicholas. The interviews

Tracy’s dish, which had the “hellish” ingredients, is also a favorite of the judges

MasterChef, the Mystery Box becomes Golden and the judges do not forgive

MasterChef 11, between the crafty ones and the elimination of Giulia … the ratings rise

With them also Polone, who amazes the judges with a dish that brings out all his positivity

Pietro does not go up to the balcony, but he has a big advantage, that of studying the dishes of Chef Lele Usai

Dalia replicates Chef Usai’s recipe perfectly, his dish is the best of the Invention test

After presenting her dish, Elena blushes in front of Chef Usai

According to the chefs, Dalia’s dish is the one that comes closest to the reach of the starred Chef Usai

During the Invention test, Mery loses her compass and presents the chefs with an incomplete dish, forgetting the sauces

Mery is the worst of the test and is forced to take off her apron, she is the second to leave the Masterclass

At the end of the second Skill Test, the judges have to decide who between Tina and Nicky must go home, Tina takes off her apron and greets her teammates and judges with emotion