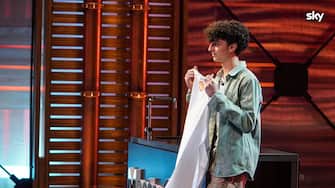 As young as he is determined, Carmine he is only 18 years old, but his ideas are very clear on what he would like to become when he grows up: a multi-starred chef. He is in the last year of scientific high school, but he has always wanted to attend a hotel school, considering his great passion for cooking.

Despite the various vicissitudes of life, Carmine has always continued to pursue his greatest goal supported above all by his older sister Sara, his “rock”. The large family is the pivot of his life, the only real certainty.

Carmine defines himself as self-taught and his cuisine is experimental, sophisticated and open to any gastronomic culture. A kitchen free to express itself without restrictions.

MasterChef, one step away from the final rush. Aquila, Irene and Antonio return to the Masterclass

To the Live Cooking, Carmine hits the heart and palate of the demanding chefs Bruno Barbieri and Giorgio Locatelli with a fusion dish of gyoza Japanese. The delivery of the white apron with his name is an overwhelming, unexpected emotion and for him MasterChef 11 represents not only an opportunity to really focus on himself, but also a way to overcome the insecurities that have always accompanied him in life of him.

Lia is a banker who lives in Bardolino (Verona) with her husband Nicola, nicknamed by her “The criticone“Because he does nothing but complain. However, Nicola is also his biggest fan and supporter, the one who pushed her to send her candidacy to MasterChef Italy and to pursue his biggest dreams.

MasterChef 11, who are the eliminated of the ninth episode. PHOTO

His great passion for cooking was born in school, where between a version of Latin and Greek he began to get in the kitchen experimenting with new recipes and preparations for friends and family.

To the Live Cooking he decides to bring a plate of orecchiette in honor of his dear Apulian grandmother. His performance does not completely convince Chef Bruno Barbieri, who promises to amaze during the Skill Checks.

MasterChef and the external test on the set of Block 181. All the previews

For Lia the Challenges they are certainly not a walk of pleasure and has fought to the last to win his place in the Masterclass Of MasterChef Italia 11. Its motto is: “Always smile and never be discouraged”for this reason she defines herself as a cheerful and transparent girl, but also a little touchy. MasterChef for her it represents the possibility of making a passion concrete, an essential piece that will lead her to achieve her greatest goal: to open a restaurant of her own.

Christian is a university student enrolled in the course of Food Chemical Engineering of Turin, a perfect combination of his two passions: chemistry and cooking. Lover of nature and outdoor activities: at the age of 8, his parents decided to enroll him in the scouts, to help him socialize with his peers.

MasterChef 11, who are the eliminated of the seventh episode. PHOTO

Christian is affected by Asperger’s Syndrome, an autism spectrum disorder, which creates difficulties in talking to strangers and in knowing how to express one’s emotions. Her mother Elena is her greatest supporter, her greatest strength and her love for her cooking comes from her, when as a child she observed her while she prepared delicious dishes for the whole family.

MasterChef 11, Anna says goodbye to the dream of reaching the final. The interview

Today cooking for him represents a true constant, a way to express his essence and his freedom. In the kitchen he defines himself as a curious and courageous person because he tends to experiment a lot, even going against the gastronomic logic. Until the very end, he wasn’t sure to send his application to MasterChef Italy: he says he found the courage for all the people who, like him, struggle against their limits every day.

Go to the Special MasterChef

To the Live Cooking presents “Tradition and Panic“, a flan with peppers with bagna cauda sauce and a flan with yellow tomatoes with gorgonzola and walnuts sauce. Despite some problems during the dish, it still manages to present an excellent dish and access Skill Challengeswhere he wins the white apron with his name and the right to enter the Masterclass.

Two souls that embrace those of Tracy: one Nigerian who represents her origins, her past and her culture, and the other Italian who instead expresses her deep love for food. Two different but complementary personalities that she tries to bring to all of her dishes.

He lived all his childhood in Nigeria and then moved to Italy with his family. This is how he begins his journey to discover Italian culture and tradition, tasting new dishes and delighting with different and tasty recipes.

Overcome the initial difficulties, Tracy she managed to integrate herself into the Italian gastronomic culture also thanks to her boyfriend Samuele, who for more than eleven years has made her life more beautiful and serene. Over time, cooking has daily characterized her life and for Tracy food is something spiritual: it does not eat to feed the body, but to feed the soul.

To the Live Cooking he decided to focus on a dish that spoke of his Nigerian roots, that represented his colorful personality and his unmistakable enthusiasm. “My land”, fried rice with crispy vegetables and liver with celery, lettuce and ginger emulsion, moves the judges who allow her to access the Skill Checks with three yes. There Creativity challenge is a confirmation of what has already been demonstrated to the Live Cooking. His burrito is the best of all tests and for her this translates into one thing: white apron and access to the final.