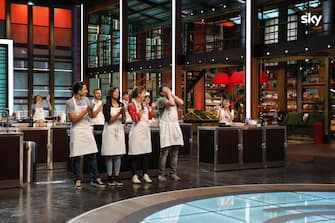 The race opens with a “new” mystery boxes. Under the Mysteries, aspiring Chefs do not find ingredients but stylized portraits, each of which represents the judges of MasterChef. Surprisingly, in fact, it is the judges who do the shopping for the competitors, playing the role of mentors and choosing ingredients that give their “pupils” the right creative cues

There Mysteries brings out different personalities. And according to the judges, the best were: Lavinia and Sara who cooked with the ingredients chosen by Barbieri, Bubu who relied on the shopping done by Cannavacciuolo and Leonardo. For the judges Bubu expressed heart in his plate. In the photo Leo and Edo in the presence of Bruno Barbieri

atInvention Test the Chefs communicate to the aspirants a double challenge in the kitchen. After dividing them into opposing pairs and having each do the other’s shopping, the judges reveal to the cooks that it is not a question of “one against one” but rather a couple challenge. The advantage that Bubu got after winning the Mystery was to be the first to choose the person to cook with. Competitors of the worst couple will not be able to face the outside and will have to compete directly at the Pressure Test. In the photo, Roberto and Lavinia

Joseph And Matthias when they discovered that they are no longer opponents but rather the couple who, with the shopping done by both, will have to amaze the three judges of MasterChef 12. In the photo the two competitors shaking hands, happy to cook together

Competitors must organize themselves and collaborate together in order to be able to use all the ingredients they have taken, because as Bruno Barbieri says “in a kitchen that works there is collaboration”. In the photo the hug between Joseph and Matthias

Between Bubu and Nicola (in the photo) there was immediately harmony. Bubu used the advantage gained in the Mysteries to do smart shopping. The “harmony and contrasts” dish is the first the judges decide to taste

MasterChef 12: Bubu and Leonardo among the best of the Mystery

Sarah and Francis as adversaries they find themselves facing the test together. Despite the predictions and advice of Chef Barbers (in the picture), the two are satisfied with their work

In the photo Sara and Francesco they bring their plate to the judges who can’t wait to know how “their love story” turned out. Called by Chef Barbersthe two present a dish that greatly satisfies the jury, in particular Cannavacciuolo compliments the aspiring cooks who, despite the lack of mutual sympathy “managed to put work first”

Ivan and Laura they worked together but without talking to each other. The two competitors, having discovered the true intent of the judges, were unable to bond and their dish bears witness to it. For Chef Locatelli “there are too many mistakes” their work is the worst of the test and the two competitors go directly to Pressure Test, skipping the external one

Masterchef Italia, what all the winners of previous editions do. PHOTO

The first four-handed cooking brought out many aspects of the aspiring chefs that the judges grasped. For them there is no doubt, it is the couple formed by Joseph and Matthias to have presented the best dish. To them the outdoor advantage of captain the brigades. The blue Calabrian sea is the background to the second exterior. The aspiring Chefs, divided into teams, compete in the conception of a creative menu that knows how to enhance the sweetness of the IGP Tropea onion and which at the same time will make one brigade smile and the other weep

Each brigade is then left with the choice of deciding whether to accompany the meal with one extra preparation: an onion-based drink. So creativity is the key ingredient in order not to risk ending up in tears at the end of the test

In the pantry there are other products of the Calabrian tradition: surici, swordfish, prawns, anchovies, but also pecorino, ‘nduja, potatoes and licorice. It’s up to the aspiring chefs being able to conceive a creative menu capable of enhancing the IGP Tropea onion and to convince the diners: 35 genuine Calabrians, producers of local excellence. In the photo Chef Locatelli assists in the preparations of Hue

United in the previous test, Mattia and Giuseppe face each other in this external one. A coin toss of Chef Cannavacciuolo decrees Giuseppe as the first to have to make a choice for his blue brigade. The first chosen is Edward, and component after component Giuseppe manages to form the brigade he had in mind. In the picture Edward and Leonard while preparing an onion drink

MasterChef, little chefs grow up: who is Nicola eliminated from Barbieri to Junior MasterChef

While Chef Locatelli and Chef Barbieri they enjoy the landscape, Chef Cannavacciuolo asks Mattia, immediately noticing the mistakes of the reds: the choice to call the entrée “onion parmigiana”, not having yet baked the onions to be stuffed for the first course, nor started preparing those for dessert and for the drink . And as the first tensions arise between Bubu and LaviniaChef Cannavacciuolo takes leave of the red brigade

It’s time for the verdict. The appetizer of blue brigade liked it for its freshness, but the second red dish was a great success

The three judges overturn the basket of onions: the bottom is red, a sign that once again it is the red team that triumphs. Despite the defeat, Edoardo tries to motivate the blues, who lost 14 to 21

The Red Brigade triumphs for the second time outdoors. The embrace of the team members, proud of having brought home the result despite the strategy developed by the captain of the blue brigade, Giuseppe

MasterChef, Rachele, Francesco G. and Letizia are out of the game. The interview

The seven components of the blue brigadewith a bruised face and the black apronthey enter the kitchen of MasterChef, observed from the top of the balcony by the red team. Pressed by Chef Barbieri, Giuseppe explains the strategy he applied for the composition of the brigade: to keep close Francescone, Francesca and Silvia, his most trusted companions and at the same time deprive Mattia of Edoardo and Leonardo

The Chefs conclude that two clans have formed within the MasterClass. But the cause of the defeat was Nicola’s dessert. The young man justifies himself by explaining his difficulty in measuring the agar agar. Clarified these problems the worst couple of the previous episode, Ivan and Laurajoins the blue team

Theme of pressure test it’s the pastry shop. The aspiring Chefs will have to prepare a crêpe Suzette accompanied by a honey zabaglione, a preparation born in Monte Carlo in the Café de Paris, due to a mistake by the young Henry Charpentier in the preparation of the dessert for Edward VIII

MasterChef 12: Mattia and Giuseppe captains of the exterior

Among the aspiring chefs, to have more problems during the Pressure is Franciscan who tries to capture as much as possible from his companions. The final minutes of the test are a crescendo of pressure: Edoardo launches his motivational screams, Francescone invents alternative methods to heat the eggnog, Silvia launches the cooking torch, while Laura just can’t turn it on. But it is Francesca who has to go out, in the photo as she takes off her apron

Francesca Filippone says goodbye to MasterChef. The Chefs greet the contestant, sorry that she hasn’t been able to really show all her value. In the picture, Frances in tears he gives a last farewell to all his comrades: “Fight against fear because it is what has allowed me to make my dreams come true”. The race continues next Thursday on Sky Uno

MasterChef 12: The judges shop for the Mystery Box