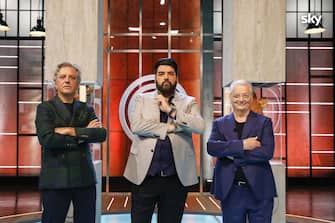 After passing the live cooking and dreaded challenges, the white aprons enter the kitchen of MasterChef 12 for the first Golden Mystery and to their surprise, instead of Bruno Barbierithey find the famous and feared Master Iginio Massari. The idea of ​​the exchange, had by Barbieri, unleashes fear and anxiety (as foreseen and wanted by him). The race begins under the sign of high voltage

Master Iginio Massari as is known, it is the nightmare of all aspiring chefs, and as he points out Antonino Cannavacciuolo “use sugar but it makes all the pupils blood bitter”. Happy to lend itself to the game of Bruno Barbieri following the race behind the scenes, Maestro Massari presents the Golden Mystery to the students of the masterclass, in the photo the eloquent expression of Letizia

For the Golden Mystery, the 20 aspiring chefs have to choose whether to make a savory dish featuring chocolate or a dessert of their own invention. The challenge involves tasting not only the judges but also the Master Iginio Massari which will decide who is or is not up to the test. During the preparation, the judges wander around the benches with a clinical eye trying to give some useful advice. The tension in the air slices you apart. In the photo, Bubu

Astonished, the judges discover really interesting ideas and dishes during the tasting. To shine, immediately deserving the balcony are: Letizia, Edoardo, Ollivier and Francesco. Following them on the instructions of Maestro Massari: Mattia, Francesco, Ivana, Francesca and Bubu. Compromising the test of Lavinia and Nicola is their attitude, the two have to face the Invention Test together with the others

For the invention test, Iginio Massari together with Antonino Cannavacciuolo and Giorgio Locatelli ask the contestants to prepare a dish with protagonists the bread and the tomato. Aspiring chefs can choose from the different types of these famous ingredients in all regions of Italy, and beyond. 45 minutes to make a dish to present to the judges

Rachel decides to prepare a frisella dipped in a Mediterranean gazpacho. But when the time runs out, the student forgets to complete the dish with the yogurt sauce. During the tasting Locatelli he discovers a poor dish and scolds her: “From you I expect level dishes, like the one you presented us to live cooking”

Laura she is ready to impress the judges with her creativity. She is very self-confident, she is happy with the test she has faced and with the result she hopes will lead her to climb onto the balcony

Lavinia presents the judges with a dish that is too simple for the time they had during the test, second Antonino Cannavacciuolo the dish speaks for itself and seems to say: “I have decided to give up”. Also Rachel according to the Chef he did the bare minimum

Masterchef Italia, what happened to all the winners of the previous editions. PHOTO

The judges consult each other before giving the final verdict to the students who are now exhausted and fear the worst. Sarah and Luciana are the best of the Invention Test, for this reason Antonino, Giorgio and Maestro Massari decide that for the first outdoor test Luciana will be the brigade leader

MasterChef Trip, the special with Barbieri, Cannavacciuolo and Locatelli is on Sky Uno

Lavinia he could have done a lot in this test but decided not to risk it and presented a recipe that was too simple, second Chef Cannavacciuolo the young cook didn’t cook, presenting only three ingredients on the plate. Leonardo and Rachele are also at risk, but among the three competitors, according to the judges, who have to wear the black apron of the Pressure test is Lavinia: “I hope I don’t disappoint you again chef”, he exclaims, taking up the challenge

For the first outdoor test, the students are a Bassano del Grappa. Here, to welcome them on the old bridge, symbol of the city, there are Giorgio Locatelli, Antonino Cannavacciuolo and Antonio Lorenzon, ninth Italian MasterChef who for 15 minutes supports the brigade made up of only 9 members (this is Luciana’s advantage). The protagonist of the test is the local white asparagus, a gentle vegetable with a bitter sweet taste, which must conquer the palate of 35 diners

MasterChef Italia is back: watch the promo

The 10 pupils left they form the red brigade knowing at the start that they cannot count on Antonio Lorenzon’s help in the kitchen. Within 10 minutes the reds elect their captain by voting: it is Robert. Now the two teams are ready to share the tasks in the kitchen and to give their best for their first test outdoors

Both brigades, both blue and red, are equally loaded. Olivier and Nicola (in the photo), they prepare the traditional dish for the diners, hoping to tempt them and bring home the result

MasterChef, little chefs grow up: who is Nicola eliminated from Barbieri to Junior MasterChef

Time advances inexorably and the 35 guests at the banquet are waiting to taste the delicacies cooked by the aspiring chefs. With the arrival of the waiters, Chef Locatelli calls Luciana, head of the blue brigade, and urges her to take a look at the dishes coming out. Something escapes her, her team, at times, seems to get lost

The ninth Italian MasterChef, Antonio Lorenzon (in the photo), he does the honors of the house, goes around the tables asking which one liked best between the courses of the blues and the reds. The first interviews give the members of the red brigade as favorites, but as we know, the first impression is not always the one that counts

In fact, the second round of interviews at Antonio Lorenzon’s tables sees the blues favored for the delicate flavors of their dishes. The tension rises, and some bickering breaks out in both brigades, after all the external ones are always at high voltage and it is not easy to maintain control

Here comes the verdict that sees the red team triumph with a landslide victory. And the compliments of the judges who appreciate, together with the 35 diners, the appetizer, the pasta sauce and the idea of ​​a side dish for the second course which has been able to give that extra touch of freshness

The leader of the red brigade, Roberto, celebrates the victory of the outdoor test, the first for everyone and for him as captain. In the meantime, the blue team prepares to return to the kitchen where Lavinia and the feared await them Pressure testing

Returned to the kitchen of MasterChef 12aspiring chefs and judges welcome back Bruno Barbieri who dressed in black like any self-respecting Pressure, greets everyone and underlines that he hasn’t missed any minute of the rehearsals

The (not easy) goal of the Pressure testing is represented by the replica of the mashed potatoes by Joel Robuchon, the most starred chef ever, for whom Chef Giorgio Locatelli also worked. For his welcome back, Bruno Barbieri wants to be “good” and takes the opportunity to provide some extra information to the competitors in the race

The test is passed by Edward who with his mashed potatoes (passed three times), leaves the three judges speechless and secures a seat on the balcony. The young amateur chef is thrilled and runs to join his companions on the balcony

According to the jury, Luciana and Lavinia are the worst of the Pressure testand between the two, it is the first to have to leave the kitchens of forever Master Chef Italy. The oldest competitor of this edition takes off her apron and greets her with a smile: “I’m going home to be a grandmother, I’m glad I worked with these guys. I look forward to putting the things I learned into practice with my family and friends. I’m happy” – comments the 74-year-old Luciana Battistini. The race continues next Thursday on Sky Uno