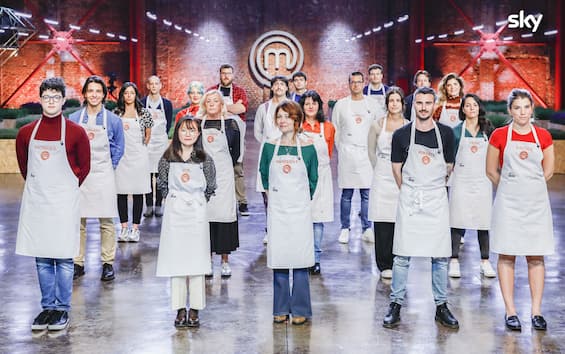 The long journey of MasterChef Italy begins (THE SPECIAL), Thursday 29 December on Sky and streaming on NOW, the 20 aspiring chefs who make up the Masterclass face the first tests of this season, with the dream of becoming the twelfth Italian MasterChef. To judge them, the trio formed by Bruno Barbieri, Antonino Cannavacciuolo and Giorgio Locatelli. which from the very first moments will show this year’s competitors, in the Sky Original cooking show produced by Endemol Shine Italy, that in a tense and full of pitfalls competition like this one must never take anything for granted.

Upon entering the kitchen they will find a Golden Mystery Box, according to which they will be able to prepare a sweet or savory dish, which will give the best of the test the opportunity to go directly to the balcony thus avoiding the next step. Those who have not fully satisfied the judges will instead get back to work for theInvention Testfor a test of creativity that requires imagination and ingenuity, being based on two typical and basic products of the Italian culinary tradition: aspiring chefs will have to respect them, elevate them and make them absolute protagonists.

the first Test in External

The route of amateur cooks will continue with the first Try outdoors season: the historic and fascinating Ponte Vecchio of Bassano del Grappa, which will welcome the chefs busy designing and preparing a menu for 35 producers of DOP white asparagus, local excellence and absolute star of the courses. Guest of this challenge in the Veneto region Antonio Lorenzon, “landlord” from Bassano and ninth winner of MasterChef Italia in a final that is still memorable today. Upon returning to the Masterclass, the defeated brigade will be engaged in pressure test in which the contestants will be tested on their technical basis. Who will have to take off the apron, leaving the MasterChef Italia kitchen already after the first round?

The appointment with the daily program also continues, broadcast from Monday to Friday at 19:45 on Sky Uno and streaming on NOW. During this new week we will be able to get to know the aspiring chefs, official members of the Masterclass, even more closely, after which we will see Iginio Massari engaged, together with his daughter Debora, in the preparation of the classic Yule log but in a more modern version. Then Mime Kataniwa and Bruno Tanzi, protagonists of the last edition, will return to the kitchen for a surprise try; Maradona Youssef, from the fifth edition, who will talk about his experience as MasterChef at the Duca di Dolle Bistrot before cooking together with Tracy Eboigbodin, winner a year ago; and Lia Valetti, also from the latest edition, who will submit to a special question, by Bruno Barbieri.

The program was implemented in full compliance with safety of the participants and the regulations relating to the measures to contain the contagion from the Sars-Cov2 Virus as per the DPCM in force during the registrations.

The whole world MasterChef Italia chooses to get involved – even this year – in issues of environmental and social sustainability, promoting conscious and eco-sustainable consumption, respecting the environment and not wasting food resources. For years now, production has been adopting an approach in all workplaces plastic free and eco-friendlyall consumer products related to food (plates, glasses, cutlery, trays, napkins) are compostable and eco-sustainable, and collaborates with Last Minute Market to recover the surplus left unused during the registration of the episodes in favor of the non-profit organization “Work Cardinal Ferrari” who runs a canteen for people in difficulty in Milan. This year, by refining the processes for purchasing, disposing and recovering products and implementing a food waste management system, MasterChef Italia was the first company in the world to obtain the “Food Waste Management System” certification from Bureau Veritas, present globally and accredited by over 60 international bodies, world leader in offering verification, certification and audit services in the fields of Quality, Health and Safety, Environment and Social Responsibility. Bureau Veritas has also certified the correct application of the “Green Audiovisual” protocol which certifies the ability to manage environmental sustainability, reducing consumption and environmental impact, reducing transport, adopting a correct disposal of waste and waste generated.

In 2017 MasterChef was crowned by Guinness World Records as the “Most successful culinary TV format in the world”: there are more than 500 editions produced since the reboot in 2005, in 64 local versions and more than 10,000 episodes broadcast worldwide.