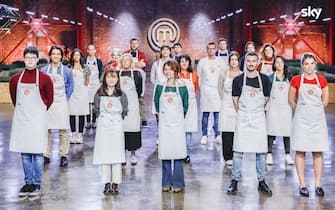 Luciana Battistini she is the oldest competitor of the Masterclass as well as the first eliminated of this twelfth edition of MasterChef Italia. The brilliant 74-year-old immediately confesses that she didn’t even want to participate in the competition: “I didn’t think I could enter the competition, but since I entered it and I’m very combative … I will fight to the death!” And so she did, even if for a short time, she showed all her grit and passion for cooking

Luciana, among the worst of the Pressure test together with Lavinia during the third appointment, leaves the scene with a smile on her lips: “I’m going home to be a grandmother, I’m happy to have worked with these guys. I’ve tried everything, the glory and the elimination. I look forward to putting the things I learned into practice with my family and friends. I’m happy”

The dream in Luciana’s cottage? Open a restaurant for children, where they can cook, eat and play, “let’s see if I can make it happen”, she told us in the interview a few hours after the elimination. In the photo, she is the second on the right to peep out between Letizia and Francesco Girardi

In the fourth appointment, the Masterclass faces the first Skill Test of the season which sees the participation of the starred Chef Davide Scabin in the role of external exam commissioner. After a high-voltage race, a there are three of them to leave the race forever: Rachele (in the photo while she takes off her apron), Francesco G. and Letizia

Rachele Rossi arrives at MasterChef Italy 12 with the desire to redeem herself and find a reason that radically moves her. With his plate “From skin to bone”: Sea bass ravioli with sea bass stock, skin chips and celery and lemon extract, manages to conquer the judges, but remains in the competition until the fourth episode

In the photo, Rachele before leaving the MasterChef kitchen forever: “It was a very intense experience, albeit brief, both with the judges and with everyone else. All the emotional part you experience is super amplified, you feel like inside a bubble, I can’t even say if it’s better or worse than I expected, because it’s something incredible that will enrich me for life”, these are his words a few hours after elimination

Francesco Girardi, 33, professional photographer, runs away from home at the age of eighteen to go and live in Cesena to study food science and technology. His love for cooking begins in those years, a passion born by chance that remains in his life by choice. In addition to cooking, his vocation is photography. He starts taking his first professional photos in the kitchen of his friend’s restaurant, and then moves on to weddings, disco nights, food and as a journalistic photojournalist

Francesco, in the photo while embracing Laura, leaves the scene during the fourth episode in which after the new Black Mystery Box, the worst end up directly in an immediate Pressure Test, and in which the first Skill Test of the season is also judged by a guest visionary and innovator, chef Davide Scabin. In the same evening, the unexpected triple elimination leaves everyone stunned

The interview with Francesco G.

Francesco G. says hello to the race: ”Certainly entering through that door was a very strong emotion, for eleven years I watched that scene on TV. As a photographer I’m used to getting naked, but that’s my job and I know how to do it, cooking in front of the cameras is stressful, but humanly the greatest gift of MasterChef are the people we meet there, all the staff as well as the competitors”

Letizia Borri, the social and health worker of Carpi, to participate in MasterChef Italy 12 decides to quit his job to throw himself into this unexpected adventure. Her connection with her cooking begins as a child thanks to the influence of her grandmother Mariagrazia, the rock of her life. It is she who brings her closer to this world, teaching her the Emilian gastronomic culture and the most famous regional recipes

Letizia comes out in the sensational triple elimination during the fourth round together with Rachele and Francesco G. On her participation she says: “It was an unrepeatable experience, in some moments it was a slap on the face, when you enter that world, you are necessarily judged and put to the test, the stress is at exaggerated levels, I felt out of place in many cases, I’m honest I couldn’t handle all the stress and pressure in front of the cameras. While meeting new people, beautiful places and the judges was the best part”

Rachele, Francesco G. and Letizia are out of the game. The interview

For the judges there are too many mistakes made during the three rounds of the Skill Test by Letizia who in her heart hoped for a second chance. Faced with the verdict, Bruno Barbieri sincerely reminds her that “once we have reached this level of competition it is unacceptable to make certain mistakes”

Watch the video: “Letizia has to leave the MasterChef kitchen”

The story of Francesca Filippone, who came out on the fifth round of the race, is a phil rouge around food and the world: after a degree in Cultural & Linguistic Negotiation at the University of Milan, he left for China at the age of 23 to deal with refrigerators. He has lived in China, North / South Korea and many other places in the world. Today she is a freelancer and manages her business from Italy; she lives in Rome, in the Chinese quarter, and is engaged to Leopoldo of Italo-Persian origins

The fifth appointment with MasterChef Italia sees the thirty-nine year old Francesca leave the scene, in the photo next to Giuseppe, the Bery-Cooper of the Masterclass. The contestant falls in the Pressure Test on a crêpe that went badly and bids farewell to her comrades and judges in tears with great emotion

The message that Francesca launches through MasterChef is that study and courage make you achieve what you want, “I say that I come from a humble family and I made myself, without any push. The rule always applies that working and studying it takes you where you want to go, and failures are also needed. I hope young people learn to believe that dreams come true like this”

Ivana Santomo is sixty years old and comes from Rome, she worked for 20 years as a parliamentary assistant and is now the secretary of a famous writer. She likes to devote herself to her passions: art, painting, writing and cooking. Her connection with cooking dates back to her childhood, when she and her grandmothers prepared fresh fettuccine for the whole family. She leaves the scene right on the “comfort food” themed evening

MasterChef 12, Ivana leaves: “MasterChef was a gift all mine”. The interview

Here she is in the photo while she takes off her black apron, we are on the sixth date and it is forbidden to make mistakes. Ivana falls in the Pressure Test on the “creative soup” and says goodbye to the dream of reaching the final. The contestant says goodbye without any regrets, she went the way she had to go

The official site of MasterChef

In her eyes and in her words there is no disappointment of not having gone all the way, the performance anxiety in a place like MasterChef prevailed, “I felt the pressure of the match”. In the photo, the hug with Antonino, “the judge who surprised me the most: I found him exciting, his eyes light up when he talks about food, he is capable of leaving an indelible mark, he is charismatic and unpredictable”

Go to the MasterChef Special