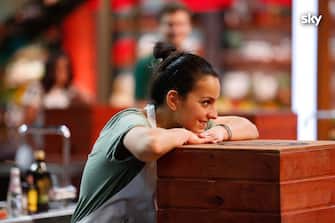 The doors of the Masterclass open and to welcome the aspiring chefs there is a new theme: the comfort food. A mystery boxes hides special ingredients for the contestants, will they be able to create a dish that represents them?

The judges of MasterChef 12 they ask Sylvia what her comfort food is and the aspiring cook answers without batting an eye “sugars and carbohydrates”. The contestant trusts that when she is in a despondent situation she seeks help from the family, especially from her partner and her children

MasterChef 12, all the videos on the official site

The new mystery boxes it hides special preserves created during the pandemic period by important Chefs. It’s up to the contestants to devise the right strategy to integrate them into their recipes and present a dish that satisfies the judges. In the photo Mattia and Ollivier study the ingredients

Olivier he aims to finish the dish as he doesn’t know any of the ingredients provided by the Chefs. During the tour between the stations Chef Barbers remind the aspiring chef to show some arrogance in his dish

Going around the stations, the judges say they are a little disappointed with the dishes they see. “There mystery boxes it’s an opportunity to express oneself and not to do homework” says Bruno Barbieri addressing the entire Masterclass

After the first half hour of preparation, Bubu he feels satisfied with his work: “for this test the Chefs asked us to be arrogant and today I am” commented the young chef to Antonino Cannavacciuolo

MasterChef 12: Bubu and Leonardo among the best of the Mystery

The first person called to taste is Lavinia which presents its capellacci stuffed with ricotta. For the judges, her ravioli are beautiful to the eye and his in general is a good job. “I’m having fun chef”, confides the young woman to Antonino Cannavacciuolo

The second dish called by the judges is to Laura: “Mullet from Sicily”. “It was good for you to hit rock bottom, I feel a positive energy, I almost see another Laura,” she comments Cannavacciuolo after the tasting. “The risk and the desire to do better than others lead to some tricks” he adds Barbers

The tastings close with Olivier that manages to integrate the preserves making them almost disappear. “Sapori del sud” is a dish that according to the judges is brilliant. “It’s a beautiful dish and it’s delicious, that’s what I want to hear,” he commented Chef Barbers

The dish that all three judges agreed on is that of Olivier, the only one without a flaw. “I’m proud of myself” said the aspiring chef. Waiting for him now is an advantage that he will discover during the invention test

theme ofInvention test it’s still comfort food: the supplì on the phone is the dish to be replicated. The judges host it Chef Jacopo Mercurowhich presents its award-winning supplì and provides valuable advice only and exclusively to the winner of the Mystery Box: Olivier

MasterChef, Rachele, Francesco G. and Letizia are out of the game. The interview

Chef Jacopo Mercuro, 30 years old, has transformed simple rice croquettes into masterpieces in his Roman pizzeria 180grams, thus entering the Italian and world scene. The chef brings to the Masterclass three examples of transformation of the supplì: oxtail, burnt sphere and the St. Peter’s-shaped croquette filled with noddles

Now it’s up to aspiring chefs to create and invent the filling for their supplì in sixty minutes. What the judges want is crunchiness on the outside and softness on the inside. In the picture Joseph during the preparation of his croquette, obviously inspired by a mix of ingredients from his land: Puglia

Edward he is determined to make a good supplì that reflects his personality “a little peasant like him” confides the chef. Overall, his dish shows itself to be “eager” as a second course Barbers even if the breading is not perfect

Nicholas presents his “Riviera nel supplì” to the judges. “You always have to overdo it,” he comments Cannavacciuolo. The aspiring chef must give rein to ideas and concentrate on a precise ingredient in order not to lose focus on the dish. When it’s time to Bubu, the young man presents “his parmigiana” judged “wonderful and flawless” by the Chefs. In the photo the handshake between Nicola and Bubu on his return to his post

Robert presents “the first map” of the second season Barbers. Ivan and Sara they took the job home with “big mistakes”. All three will face the Pressure Test by skipping the outside. Hue, Laura and Bubu instead they expressed a great technical value in the test by winning the first three places. But it is Bubu who has the advantage of captaining the brigade in the external test

The adventure to become the twelfth Italian MasterChef continues outdoors, in the splendid location of Terni. The judges welcome the aspiring chefs in front of the splendid Marmore waterfall

Masterchef Italia, what all the winners of previous editions do. PHOTO

The judges are asking aspiring chefs to compete on the Terni tradition. Among the dishes to prepare the ciriole, to be tasted by the true experts of local taste

Chef Cannavacciuolo advises Bubu to make good use of his advantage. Finally, the brigade leader chooses Silvia as captain of the opposing team and entrusts each of the members with team tasks

Bubu and Silvia they are the two brigade captains in Terni. The aspiring chefs have one hour and 45 minutes to prepare the two meat and fish menus

Chef Barbers he bursts into the red brigade’s post to ask questions, sending the competitors into a bit of a panic. Also Sylvia he is in the ball so much that he gets the names of his teammates wrong and goes into confrontation with Lavinia

Meanwhile Chef Cannavacciuolo gets close to Hue, of the blue brigade, who by mistake spilled a large quantity of pepper into the dried fruit. To the rescue of him comes Nicholas who, despite the perplexity in the success of the preparation, helps her to recover the situation

The captain of red brigade, Sylviais now lost. Her team asks her to keep calm while they serve the second course of wild boar meatballs with a side of mushrooms, the diners wait to taste their dish

Chef Cannavacciuolo he recalls the brigades by telling them that “they cannot settle down and have the calm they have when they are at home in the kitchen”. The contestants still have three minutes left before they bring out their plates

Finally the moment of the verdict arrives, the diners have cast their vote and the judges ask the two captains to raise the two joysticks, only whoever finds the gingerbread will win the test. To find the typical dessert of the Terni tradition is Silvia leading the red brigade to victory

The Red Brigade celebrates victory with a long hug. “It was a tough experience, I thought I was stronger” admits Silvia as the blues lick their wounds and prepare to face the Pressure Test

The difficulties faced during the outdoor test were many. In the photo Francesco prepares to face the pressure test

The pressure test sees aspiring chefs compete over a classic recipe: minestrone, the goal is to make this comfort food tasty and appetizing. The time available is only thirty minutes

The first to be called to taste is Leonardo who has been in difficulty since the beginning of the test due to a bad wound to his hand caused while cutting the pepper. Chef Barbers scolds the young cook for his attitude. Even the dish of Ivan has many errors, among them the raw potato

The worst of the test are Leonardo and Ivana. According to the judges, the latter presented an out-of-focus dish while Leo’s reflects many of her insecurities. Of the two, the Roman competitor is the worst. In the photo Ivana Santomo while she takes off her black apron

Before leaving the Masterclass forever Chef Cannavacciuolo he reminds her to appreciate his ironic side. “Here at MasterChef I believe that my path could not be different”: these are the last words of Ivana before leaving the kitchens of MasterChef 12. The race continues next Thursday on Sky Uno