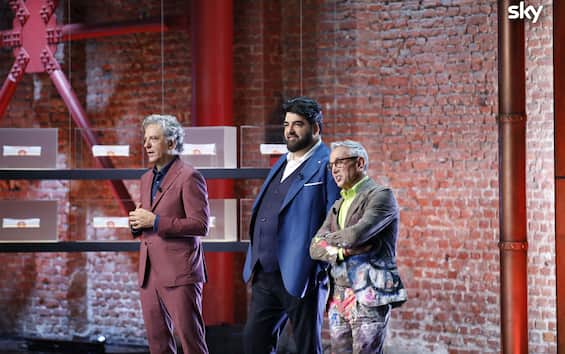 The doors of the MasterChef Italia kitchen have reopened (THE SPECIAL) and the selections for aspiring chefs continue apace. Last week, nine white aprons were already assigned, others received the gray apron to face the next phase: so those who are still waiting for their Live Cooking know perfectly well that they will have to do their best to convince the judges Bruno Barbieri, Antonino Cannavacciuolo and George Locatelli.

Thursday 22 December broadcast on Sky and streaming on NOW, the latest Live Cooking will give other aspiring chefs the opportunity to make themselves known to the judges to convince them that they deserve a place among the best amateur chefs in Italy. As always, they will have 45 minutes to cook and another 5 to present the dish, after which it will be time for judgment: with three “yes” they would get immediate access to the Masterclass, with only two “yes” you can access the Challenges, in the other cases they will have to leave the stove of MasterChef Italia.

this year’s Masterclass is formed

At the end of this first phase, therefore, all the gray aprons will meet to face the Challenges: three steps in total to evaluate not only the technical skills and the knowledge of amateur cooks but also their own cold blood. Already from the first round the best ones will conquer the white apron with their name sewn on it while others will have to leave their position, and in doing so, round after round, until the judges have filled all the places available in the Masterclass. Only those who demonstrate that they know how to manage their emotions will continue, trying to bring out technique, originality and knowledge of the subject. At the end of the two episodes of the Sky Original cooking show produced by Endemol Shine Italy, we’ll have the official components of the Masterclass of this new season. A complex and articulated path will begin, exciting and very hard, challenging and exciting, at the end of which only one will win the title of new Italian MasterChef.

MasterChef Magazine at the start

The day after the birth of the new class, the daily appointment with will start Master Chef Magazine (from Monday to Friday at 19:45, always on Sky and streaming on NOW). During the first episode, chef Barbieri will take on the role of a professor to question an exceptional “pupil”, Carmen, competitor of the last edition of MasterChef Italia: the topic will be one of the basic preparations of Italian cuisine, fish stocks; to follow, for the first week, the official competitors of this year will be presented.

The program was implemented in full compliance with safety of the participants and the regulations relating to the measures to contain the contagion from the Sars-Cov2 Virus as per the DPCM in force during the registrations.

The whole world MasterChef Italia chooses to commit itself – also this year – to issues of environmental and social sustainability, promoting conscious and eco-sustainable consumption, respecting the environment and not wasting food resources. For years now, production has been adopting an approach in all workplaces plastic free and eco-friendlyall consumer products related to food (plates, glasses, cutlery, trays, napkins) are compostable and eco-sustainable, and collaborates with Last Minute Market to recover the surplus left unused during the registration of the episodes in favor of the non-profit organization “Work Cardinal Ferrari” who runs a canteen for people in difficulty in Milan.

This year, by refining the processes for purchasing, disposing and recovering products and implementing a food waste management system, MasterChef Italia was the first company in the world to obtain the “Food Waste Management System” certification from Bureau Veritas, present globally and accredited by over 60 international bodies, world leader in offering verification, certification and audit services in the fields of Quality, Health and Safety, Environment and Social Responsibility. Bureau Veritas has also certified the correct application of the “Green Audiovisual” protocol which certifies the ability to manage environmental sustainability, reducing consumption and environmental impact, reducing transport, adopting a correct disposal of waste and waste generated.

In 2017 MasterChef was crowned by Guinness World Records as the “Most successful culinary TV format in the world”: more than 500 editions have been produced since the 2005 reboot, in 64 local versions and more than 10,000 episodes broadcast worldwide.