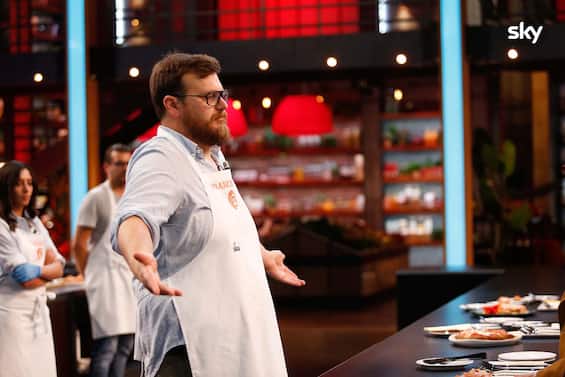 Yesterday evening, the fourth appointment with MasterChef Italia (THE SPECIAL) saw in one fell swoop, the new one Black Mystery Box with the worst shipped direct to a pressure test immediate, the first Skill Tests of the season also judged by a visionary and innovative guest such as the chef David Scabin. And in the same evening, an unexpected triple elimination: Rachele, Francesco G. and Letizia say goodbye to MasterChef. We interviewed them to get to know them better, here’s what they told us in connection from home via Zoom.

the triple interview with Rachele, Francesco G. and Letizia

Rachel: “From an emotional point of view, MasterChef is something wonderful, it was a very intense experience, albeit brief, both with the judges and with all the others. All the emotional part you experience is super amplified, you feel like you’re inside a bubble, I can’t even say if it’s better or worse than I expected, because it’s something incredible that will enrich me for life. It’s hard to go out, take a beating, see sides of your character that you don’t know, I work in fashion and I manage stress, yet I wasn’t able to manage it in there”.

Joy: “It was a unique and unrepeatable experience, in some moments it was a slap on the face, when you enter that world, you are necessarily judged and tested, the stress is at exaggerated levels, I felt out of place in many cases, last night I was sick because I was off, maybe tired, I’m honest I couldn’t handle all the stress and pressure in front of the cameras. While meeting new people, wonderful places and the judges was the best part, I also found a lot of humanity from the authors, I felt at ease in the confessionals, it was beautiful. I received so much love. Chapeau!

Francis: ”Certainly walking through that door was a very strong emotion, for eleven years I watched that scene on TV. As a photographer I’m used to getting naked, but that’s my job and I know how to do it, cooking in front of the cameras is stressful, but humanly the greatest gift of MasterChef are the people we meet there, all the staff as well as the competitors, who like you are naked, in a situation where you bond deeply!

Who did you bond with the most and with which judge did you feel the most chemistry?


Rachel: “The judge with whom I had the greatest chemistry was Giorgio Locatelli, I’ve always seen how much he believed in me, right from the start and right up to the end, good even with Bruno Barbieri and Antonino Cannavacciuolo, but more with him. Compared to the competitors, I bonded with Edo a lot, and going out was a mutual displeasure, then there’s Mattia and Franz, Sara, Lavinia, Nicola… my list would be a long one, but one person by all is Edo. Even if the great thing is that there is no one more than another, there is a mutually supportive and supportive environment between us, unique! We are catapulted into a particular situation and even if we know little about each other, it is special. Cheering for Edo, we are the two craziest in the Masterclass!”

Joy: “The strongest bond is with Francesca, I felt her very close to me, we lived very similar lives, I never wanted to tell MasterChef too much about myself, but when there weren’t cameras with I have established a very intimate relationship, even with Silvia, Ivana and Luciana, Francesco and Giuseppe, as Rachele said: in the end everyone is special, and we get along well. We quarrel, but we get along well together, because we are human and imperfection unites. If I had to give a name, it’s Francesca, we really love each other. Locatelli pushed me a lot, he told me that he believed in me even when he hugged me last night, but all three encouraged me, I listened to them, they are scary live, finding yourself in front of idols is a lot of stuff . Just like for Massari, I love him, when I saw him enter I wanted to hug him, but I held myself back”.

Francis: “Unlike Letizia, I feared a second cardiac arrest when I saw Iginio Massari among us. Seriously, for a matter of gravitational attraction, I certainly had the best feeling with Antonino Cannavacciuolo, while with the boys I bonded more with Nicola, Lavinia and Bubu, they are 15 to 20 years younger than me and there I have seen them as grandchildren, but I have to mention all the others as well. Humanly a beautiful capital.

How has your life changed, if any, after MasterChef?


Joy: “By entering MasterChef, I understood that the kitchen is the place where I want to be, but without pressure, I want to experience it with peace and serenity, I have projects, but it takes a lot of money, and I hope to have the possibility of realizing them, for now I’m going back to social work as an educator, I want to bring my concept of cooking to the world of disabilities and children. The goal for me is always help, to lend a shoulder through food, and you can also heal yourself on a psychosensory level, food is like art, a very strong means of communication, that’s how I took care of myself. When we sit down at the table, or in front of a coffee, we feel good, it’s a common gesture. We’ll see what happens, I’ll continue to cook and carry on with my projects..”

Francis: “If I may be critical, in my opinion MasterChef shouldn’t change life at all costs, it’s an important path, but it doesn’t mean it has to overturn it, I started off by taking pictures in restaurants, now I would like to implement the two things, in my studio I set up a kitchen where to have the chefs come to cook and do services for them. Let’s see what will be in the future, in the meantime maybe I’ll do fewer weddings”.

Rachel: “I quite agree with Franz, I work in fashion, another passion of mine that I won’t give up, MasterChef is a great opportunity that I will try to make the most of, finding more satisfaction in what I cook. I am happy to continue working, and since the world of work is very fluid, I would like to spend more time cooking. Let’s see what fate has in store for us, I’m positive by nature, it takes me a while to fuel up, but I usually get to my destination. We need to understand what we want it to be, I am primarily interested in expressing my personality, and MasterChef gives this chance.

The podium of the three in the final?

Joy: “Bubu, Nicola and Hue, even if honestly I would have seen well Luciana who was eliminated first, I pretend she is there, I want her in the final”.