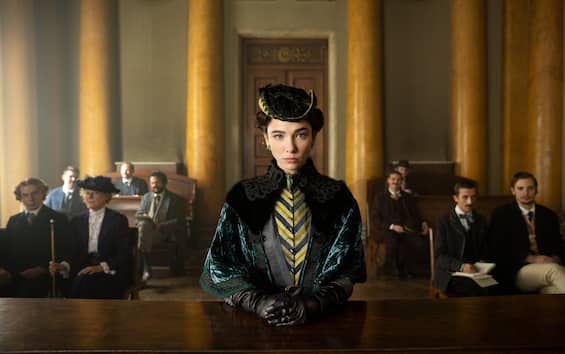 Matilda De Angelis plays Lidia Poët in the new Netflix series, entitled Lidia Poët’s law. The 27-year-old Bolognese actress takes on the role of the first woman in Italy to be admitted to the Bar Association. The series, set in Turin, will debut on February 15 on the streaming platform.

A few hours ago the official trailer of de was shared on the net Lidia Poët’s lawpublished on the Netflix YouTube channel (you can watch it at the bottom of this article).

We recall that De Angelis made his big screen debut six years ago, alongside Stefano Accorsi in the film Fast as the wind.

From that moment on, the career of this young Italian actress has continued to rise, both in her country and outside the Italian borders: she worked with Alessandro Gassman for the film The prizethen moved on to the small screen playing Mariele Ventre in the Zecchino d’oro fiction (The boys of the Zecchino d’Oro, directed by Ambrogio Lo Giudice, released in 2019). Then for her there was her big leap, the Hollywood one: she shared the set with stars of the caliber of Nicole Kidman and Hugh Grant for the television series The Undoing.

She also had huge success alongside Elio Germano in the film The incredible story of the island of roses.

Soon we will also see her in the remake series Call my agent – Italywhich tells the story of entertainment agents and their famous clients.

De Angelis won the David di Donatello for Best Actress in 2021; she was co-host together with Amadeus at the Sanremo festival and was awarded the Silver Ribbon for the international TV series in which she took part.

In addition to the countless successes of this young actress, we remind you that Matilda De Angelis is also very active on social media with regards to body positive and self-acceptance. She has decided to show herself without filters and without make-up to tell of the suffering she has experienced due to acne, a problem that characterizes her and for which she has offered herself to the network on an empathetic and supportive level. She recently also revealed that she suffers from anxiety, showing herself as she really is (without wanting to pass for a super-woman in short). This also contributes to making her much loved by the public and by the people of the network, who find enormous comfort in her example.

You can watch the official trailer of the television series Lidia Poët’s law in the video at the bottom of this article.

The TV series about Lidia Poët

The TV show coming to Netflix tells the story of the first woman to join the bar. It will be halfway between a historical portrait and a genre thriller legal.
Lidia Poët’s law is set in Turin at the end of the 1800s.

A ruling by the Court of Appeal of Turin declares her enrollment in the register of lawyers illegitimate, which prevents Lidia Poët from practicing her profession.
The reason why his registration would be illegitimate is linked only to the sex of the lawyer in question: she is a woman, therefore she cannot.

Lidia meanwhile tries to make ends meet by getting a job at her brother Enrico’s law firm. In the meantime, you are preparing the appeal against the sentence of the Court of Appeal of Turin.
The mysterious journalist Jacopo Barberis, who is Lidia’s brother-in-law, passes important information under the table, guiding her into the recondite and hidden meanders of the city of Turin.

In addition to Matilda De Angelis (protagonist in the title role of Lidia Poët), the cast includes Eduardo Scarpetta as the journalist Jacopo Barberis; Pier Luigi Pasino in those of Enrico Poët, brother of Lidia; Sara Lazzaro and Sinéad Thornhill, respectively Teresa Barberis, wife of Enrico, and Marianna Poët, daughter of Enrico and Marianna. Dario Aita instead is Andrea Caracciolo.

The series is directed by Matteo Rovere, the director to whom we owe Matilda De Angelis’ debut on the big screen, namely Fast as the wind (2016), and by Letizia Lamartire.
Lidia Poët’s law is written by Guido Iuculano, Davide Orsini, Elisa Dondi, Daniela Gambaro and Paolo Piccirillo.

You can watch the official trailer of the television series Lidia Poët’s law in the video below.