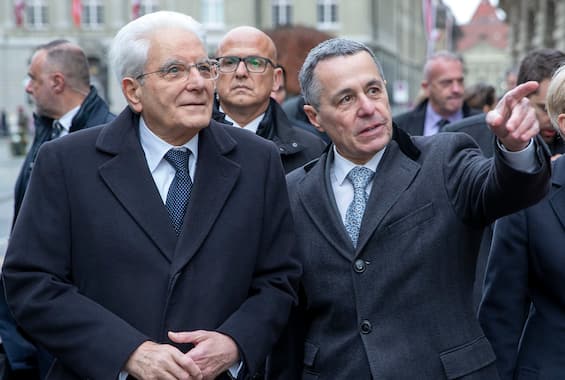 The head of state, who today signed the text of the Maneuver, was received at the federal palace by the president of the Swiss Confederation Ignazio Cassis, in Bern. Among the topics addressed, also the Ukrainian crisis

“In Italy a lot has been done on the Pnrr as regards tax evasion, with a lot of concreteness and indications and there are no signs that this chapter will be changed”: these are the words of the President of the Republic Sergio Mattarella during the joint press conference with the Swiss president Ignazio Cassis. The head of state clarified that the fight against tax evasion remains central to the National Recovery and Resilience Plan. “Tax evasion is a serious problem for any country, it is in an important way for Italy and in fact a lot has been done. In the Pnrr this is a topic that is underlined with great concreteness and many indications and has already been among the ‘other defined with the EU and there are no signs that it will be changed,” said the President of the Republic, who signed the text of the Maneuver in the afternoon.

Mattarella: “Switzerland for centuries a land of welcome for refugees”

Mattarella, accompanied by his daughter Laura, was received during a state visit to the federal palace by the president of the Swiss Confederation Cassis. Among the topics of discussion, the process of bringing Switzerland closer to the European institutions, the issue of cross-borders and Switzerland’s permanence on the black list of natural persons. Focus also on bilateral economic relations and the Ukraine crisis. “This meeting is a source of profound satisfaction, relations between Italy and Switzerland are natural, broad and intense”, said Mattarella. “Switzerland has been a welcoming land for refugees for centuries” and it is precisely, added the head of state, “the harmonious coexistence of different cultures and languages ​​that represents the most precious element of the Swiss model and is a constitutive peculiarity that the Confederation has been able to protect and enhance, offering an example of lasting relevance: a homeland made up of many nations”.

Mattarella also spoke of the Ukrainian emergency: “Today the international scene is seriously conditioned and wounded by Russia’s war of aggression against Ukraine which takes us back to the worst era of imperialism and nationalism and represents a profound laceration of that web of rules and juridical principles which have given substance to the multilateral system founded on international law and on the equality between States.The threat posed by Russia to peace and security requires from all democracies, especially the European ones, a renewed impulse of unity and cohesion”, said the President of the Republic (WAR IN UKRAINE. FOLLOW LIVE UPDATES).