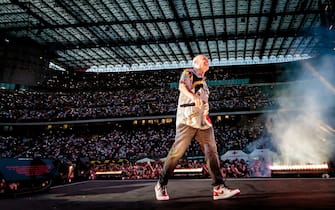 Max Pezzali conquers San Siro. On Friday evening, July 15, the first of two dates with 60,000 tickets sold opened on ‘The long hot summer’. For the artist it was the first time in the Milanese ‘temple’

WATCH THE VIDEO: Max Pezzali, his career from 883 to today

“You are an extraordinary sight”, said Pezzali referring to the public who sang, one after another, all the songs in the lineup

They Killed Spider-Man – The True Story of 883, the Sky Series

Also present was the companion of the 883s, Mauro Repetto. The stanzas overlap, from the voice of one or the other, of Don’t bother me, 6 A Loserit’s still Weekend, S’Inkazza, Jolly Blue

It was then the turn of “two girls who took their first artistic steps with us and then became two international artists”, as Max introduces them. And with the “Ciao San Siro” by Paola and Chiara you can start: North South West East which has the flavor of a reunion between old comrades, who sing neighbors, up to the familiar rhythm of Keep time

Max then returned to be the protagonist to sing The friend rule which, as everyone knows by now, “never fails”. A brief mention a Disco Inferno to then stick with Real beautiful it’s still In the night

It was then the moment of another guest, “a close friend with whom I shared most of the 90s”: J-Ax. “Max and I are really friends,” said Ax, before intoning, together, Always us

To close the evening, the song The harsh law of Gol

Then the final greeting: an acoustic version of Years