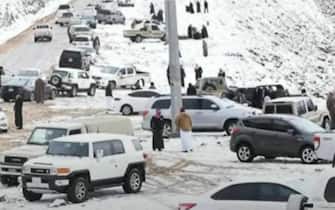 A maxinevicata whitened theSaudi Arabia on New Year’s Eve. Thousands of people have reached the Tabuk region to admire the show and the photos and videos have gone viral on social networks

The snow on Jabal Al-Lawz mountain is awaited with trepidation every year but in this case what was striking was the intensity of the phenomenon which, according to forecasts, will continue until Sunday, as reported by the Al-Ekhbariya channel which underlines the echo that the images have had throughout the world

The cold is back in Trentino, snow at high altitude

Jabal al-Lawz is also known as Gebel el-Lawz and is located above the Gulf of Aqaba at 2,580 meters above sea level. The name means “mountain of almonds”

The images of the snowfall were also filmed by a drone

The area was all whitewashed, the peak of Jabal al-Lawz it is made up of limestone-alkaline light colored granite invaded by rhyolite and andesite

Statues and people were covered with snow which fell abundantly

Many cars parked in the area during the maxi snowfall, many people came to admire the spectacle of the mountain Jabal al-Lawz completely covered in snow