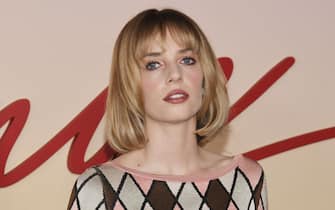 From fashion to cinema, from music to TV. Maya Hawke is one of the most talented and multifaceted stars to emerge in recent years in the entertainment world. She is the daughter of two Hollywood giants, she has been able to make her way despite her bulky surname. On 23 September 2022 it comes out Mosshis second solo album, the last leg of a fulminating and unstoppable rise

WATCH THE VIDEO: Stranger Things 4, the trailer for volume 2

Maya Ray Thurman Hawke was born in New York on July 8, 1998. She is the daughter of Uma Thurman and Ethan Hawke, one of the coolest couples in Hollywood at the end of the millennium. The two met while shooting the film Gattaca – The door to the universe and they got married in the very year in which the first daughter Maya was born (in 2002 brother Levon was born). Thurman and Hawke they divorced in 2005

Maya Hawke (pictured with mom Uma Thurman) often had to change schools as a child, mostly because of her own dyslexia. She studied at Saint Ann’s School in Brooklyn and attended summer courses at the Royal Academy of Dramatic Art in London and at the famous Stella Adler Studio of Acting in New York. She then enrolled in the renowned Juilliard School which he left after a year to launch his career

Uma Thurman: all the photos of the protagonist of Pulp Fiction

It started out as modelposing for Vogue. She was also a testimonial for the British fashion brand AllSaints. In 2017 she was chosen as the protagonist (with Kirsten Dunst and Lauren Hutton) of an underwear advertising campaign by Calvin Kleindirected by Sofia Coppola

26 children of famous people equal to their parents. PHOTO

The same year she got her first acting role: the part of Jo March in the BBC TV miniseries Little Women, based on the famous novel by Louisa May Alcott. The series was well received and Hawke’s performance was highly praised, making it known to the general public

Little Women, the BBC miniseries based on the novel by Louisa May Alcott

The following year he is in the cast of the film Ladyworld and subsequently has a small part also in Once upon a time in … Hollywood (Once Upon a Time in Hollywood) from Quentin Tarantino. Hawke plays Flower Child, one of the followers of the Manson Family

“Once upon a time in … Hollywood”, a comparison between the cast of the film and the real characters

In 2019 Maya Hawke is one of the new arrivals in the third season of Stranger Things. Interpret Robin Buckley, Steve’s colleague at the Scoops Ahoy ice cream shop in Starcourt Mall (which will be destroyed). The two develop a beautiful friendship and she too finds herself involved with the other protagonists in the vicissitudes to save the city of Hawkins and the whole world

According to Millie Bobby Brown and Maya Hawke, Stranger Things has too many characters

Robin is bright, witty and intelligent, speaks four languages, plays in the school band and is a lesbian. The character was highly regarded by audiences and critics alike. In the fourth season she always works with Steve in a video store. Hawke was nominated to the Screen Actors Guild Awards (along with the rest of the cast) and won the Saturn Awards in the category of Best Supporting Actress in Streaming TV Products

Stranger Things: in Netflix’s plans perhaps even a musical to take to theaters

In 2019 he returns to the cinema with Human capital – Human Capitalfilm by Marc Meyers, inspired by the novel by Stephen Amidon e already brought to the cinema by Paolo Virzì in 2013. Hawke plays Shannon, a young student who has an affair with the son of a wealthy hedge fund investor. Their relationship carries to the meeting between the two families of different social backgrounds (in the photo the two protagonists at the première)

Meanwhile, in 2019 Maya Hawke released two singles in collaboration with singer-songwriter Jesse Harris and the following year in August his recording debut is outthe album Blush, for the Mom + Pop label. The record, a blend of folk rock and country, received good reviews from critics. The video of the single Coverage it was directed by his father Ethan Hawke

Ethan Hawke director for his daughter Maya: the video clip in quarantine

In recent years at the turn of the pandemic, Maya Hawke appeared in an episode of the miniseries The Good Lord Bird – The story of John Brownthen starred in movie Nobody special, by Gia Coppola, in which she plays the young director Frankie Cabot. She is also in the cast of Fear Street Part 1: 1994, where he is the first victim killed in the opening sequences in the Shadyside shopping center. In 2022 she is instead one of the protagonists from Do Revengein the role of Eleanor (pictured)

Do Revenge, the trailer for the Netflix movie

September 23, 2022, anticipated by singles Thérèse and Sweet Tooth, goes out Mossthe Maya Hawke’s second studio album. As explained by his record company, it is a “Hawke meditation on rebirth and acceptance”. The artist mentioned Taylor Swift and his record Folklore as a source of inspiration for the sounds of his new musical work

For 2023 on Netflix the film is expected Masterbased on the life of Leonard Bernstein. Directed and performed by Bradley Cooper (pictured while filming with Carey Mulligan) and produced by Scorsese, Spielberg and Todd Philips. In the biopic Maya Hawke will play the role of Jamie Bernstein, daughter of the composer. And the actress will also be in the rich ensemble cast of Asteroid Citythe next film by Wes Anderson of which very few details are still known. She will eventually appear as a guest on the series Marvel’s Moon Girl and Devil Dinosaur