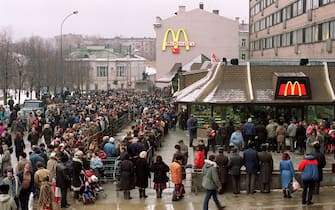 McDonald’s arrival was a symbolic event. It represented the president’s attempt Mikhail Gorbachev to open the Soviet Union to the world, not just commercially (in the photo, celebrations in Moscow for the opening of the first McDonald’s in the Soviet Union)

Twenty-seven thousand people, wrote in 1990 the Washington Post, they applied to work in the restaurant. 630 were hired. On the opening day they were cooked and sold 30 thousand hamburgershistorical record for the chain

As the Cnn, bringing burgers and fries to Moscow was not easy. George Cohon, founder of McDonald’s Canada and McDonald’s Russia, writes this in the book ‘To Russia With Fries‘ (in the photo, the opening of another restaurant in Moscow, 1990)

Cohon began looking for facilities to store and process food, but the factories he found in the area did not convince him. Like this, McDonald’s built its own supply network necessary to serve restaurants (in the photo, a McDonald’s in Moscow, 1997)

Ukraine, like Moscow is managing to beat the sanctions. THE ANALYSIS

At the end of February 2022, when Russia invaded Ukraine, they were counted in the country 850 McDonald’s restaurants

Shortly after the invasion, hundreds of companies decide to stop their activities in Russia, as a sign of dissent over the conflict launched by the Kremlin. These include McDonald’s, which closes all its restaurants. A few days after the end of the third month of the war, the chain has decided to leave the country forever (in the photo, a McDonald’s closed in Moscow, March 17, 2022)

War in Ukraine: which companies did not leave Russia

McDonald’s has it as well sold all its assets to a Russian buyer. Its premises will no longer use the name, logo and brand of the chain (in the photo, a McDonald’s closed in a shopping center in Moscow, 23 March 2022)

It is not the first time that Russia’s political events have crossed paths with the fate of McDonald’s restaurants. The chain closed some of its premises in 2014 in CrimeaUkraine, due to the tensions that led to its unilaterally declared annexation by Russia (in the photo, a closed McDonald’s in Simferopol, 2014)

In August of the same year, four of the chain’s restaurants were closed at Fly. Russia motivated the decision by talking about the violation of certain health rules. Many saw the move as a political reprisal by the Kremlin, after some countries – including the United States – had punished Russia with economic sanctions in protest against the annexation of Crimea. (in the photo, a closed restaurant in Moscow, 21 August 2014)