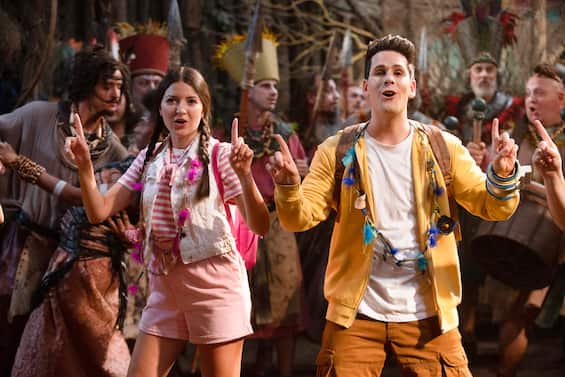 
The new film by the “Me Against You”. This time Lui and Sofì will go to the jungle. After the many adventures in Egypt, the two boys would have liked to rest a little but once grave threat looms over the planet and they understand that it will be up to them to intervene.

A magical spring hidden in the jungle holds the key to undoing all the world’s spells, but if tainted, it can turn the Earth into a barren, lifeless wasteland. Naturally Viperiana knows this, so Luì and Sofì will have to try to thwart the diabolical plan.

Directed again by Gianluca Leuzzi, “Me Contro Te- Jungle Mission” between songs and ballets takes the fans of the two Sicilian youtubers on an adventure to the cinema in which many enemies will have to be faced to save the beloved land. Also new in content, in this case friendship, nature and family relationships they are the real protagonists.

Here they are, the two boys told us

Luì (Luigi Calagna): “In every film we always try to convey a positive value because we are aware of the responsibility that we have especially towards the youngest spectators who will come to the cinema. In the other films we had devoted our attention to friendship while in this one we wanted to reflect on theme of nature but also on that of family relationshipsas we also show the bond between a daughter and her father.”

Sofia (Sofia Scalia): “In fact one of the new protagonists is Tara and through her story we talk about female emancipation. She will have to prove to her father that she is worth as much as her older brother who, although he has more muscles and more strength, is not necessarily better, on the contrary he knows how to do fewer things than her ”.

He: “Even in this film we are accompanied by ours team of friends a little messy which, however, will help us overcome all the difficulties we will encounter in the jungle. We therefore find the characters of the first trilogy but we also discover new ones and with this film we open up a new world that we hope our little fans will like”.

Sofi: “We really like the idea that with this film i children can experience moments of lightness and carefree with their families and the friends.

As far as nature is concerned, we have always lived it since we both we grew up in the countryside of our grandparents and therefore we can say that it is an aspect that has always been present in our lives, since childhood.

In the film we actually shot some scenes in the real jungle and honestly some things scared me a bit, like the scorpions, pythons…”

He: “…Or even gods giant parrotsi who are beautiful but who were hungry! In short, we faced all the possible and imaginable animals of the jungle and this aspect was the beauty but also the ugliness of this adventure!”.

He: “We are very happy to be at the cinema with a new film.

For us, the cinema has always been a magical place where anyone watching any film can immerse themselves in new adventures and can discover new places and characters with which to empathize. This is one of the reasons why in each of our films we try to go into new contexts to allow our viewers to experience new worlds”.