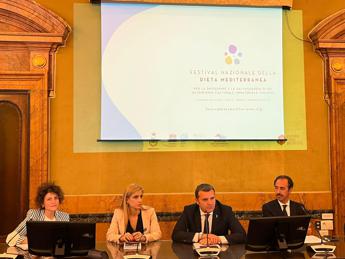 The National Festival of the Mediterranean Diet was born in Italy with a calendar of events in Campania from Paestum to Pollica and an online platform to spread the heritage of this Unesco intangible heritage, in an organic and coordinated way. The idea is to give prominence to the numerous actors of the scientific, institutional and private world who have been working for years for its protection and enhancement by embracing every aspect, from the cultural dimension to the enhancement of the supply chains that through virtuous agricultural practices and the protection of indigenous biodiversity concretely represent some of the fundamental pillars of the “Mediterranean Diet” lifestyle.


The project, which was born on the occasion of the Italian Presidency of the Network of Unesco Emblematic Communities of the Mediterranean Diet, was presented this morning to the Ministry of Agricultural, Food and Forestry Policies by the mayor of Pollica Stefano Pisani and the president of the Future Food Institute Sara Roversi. The undersecretary Gian Marco Centinaio and the director of the Archaeological Park of Paestum and Velia, Tiziana D’Angelo, took part.

The ambition is to become the largest initiative to raise awareness and mobilize citizens, young generations, businesses, associations and institutions on the issues of the Mediterranean Diet, a true nexus between human health and the health of the planet, in full harmony with the objectives of the Agenda 2030 of the United Nations and also thanks to the involvement of the most involved agencies (Unesco and Fao). A national platform has been conceived that involves, includes and gives voice to Italian society through training programs, conferences, seminars, workshops, exhibitions, shows, book presentations, documentaries and much more aimed at schools, the scientific community, society. civil, cultural operators and those of the agri-food chains.

The calendar will also include initiatives organized directly by the Study Center and the Living Museum of the Mediterranean Diet, events of national importance and numerous initiatives carried out with the contribution of city administrations and universities. It starts from 26 to 29 May with Dmed, the Mediterranean Diet Exhibition in Capaccio Paestum, an event included within the EU AgriFood Week, organized by the Future Food Institute, in collaboration with the Representation of the European Commission in Italy scheduled from 19 to 29 May in the Campania region.

From May to November, digital animation and enhancement of all the events that will be candidates in the schedule. In August, initiatives in the territory of the Emblematic Community promoted by the Museum of the Mediterranean Diet of Pioppi (Pollica, Sa), 11-16 November: Final event in Pollica on the occasion of the anniversary.