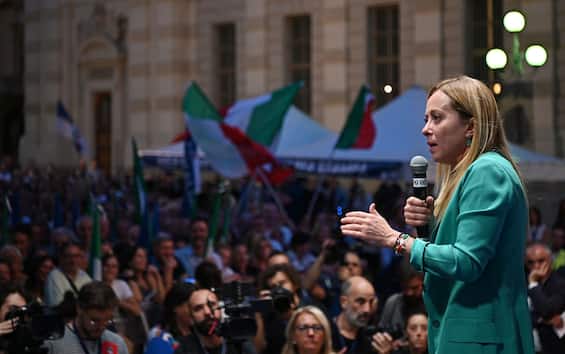 After the EU Parliament condemned “the deliberate and systematic efforts of the Hungarian government” against EU values, Italy’s center-right coalition once again split in a vote on Prime Minister Orban

Foreign policy continues to animate the election campaign. The League and the Brothers of Italy did not vote on the European Parliament document against Hungary, which condemned Prime Minister Viktor Orban for his “deliberate and systematic efforts by the Hungarian government” against EU values. Among the votes against there are in fact those of the Brothers of Italy and Lega, compact in their Ecr and Id groups. Forza Italia, on the other hand, voted in favor (in line with the PPE group) and Silvio Berlusconi warned: ” Out of the government if it is anti-European “. Giorgia Meloni told Radio Anch’io that “all the Hungarian parties were outraged by this document, even those who oppose Orban. Is it really a dictatorship? The left does not seem to me to be historically nationalist and yet they all agree that they see this story as discrimination ”, the leader of FdI specified.

Meloni then recalled that Orban won the elections several times by a wide margin, despite having everyone against and reiterated Hungary’s support given that, according to Meloni herself, “a democratic system is in force in the country. from the East are different from ours – he said – because until the 1990s we abandoned them under the Soviet yoke, now we should give them a hand. “The leader of FdI thus explained the reasons for the vote:” The document voted in Strasbourg it is a very political document. Perhaps we have not realized the situation in which we find ourselves. There is a conflict, the smart choice would be to bring European nations closer than to distance them. We cannot give allies to our opponents “, he said. And then:” It is a text in which it is said that Hungary must not take European resources, but this must be done by giving details of the allegations. there was a discretion, that is to say how much I like and dislike the government of that nation, because then it becomes difficult for everyone. In that text there is a series of issues that have been resolved for some time “. (ELECTIONS, THE VOTE CHALLENGE: THE SPECIAL)