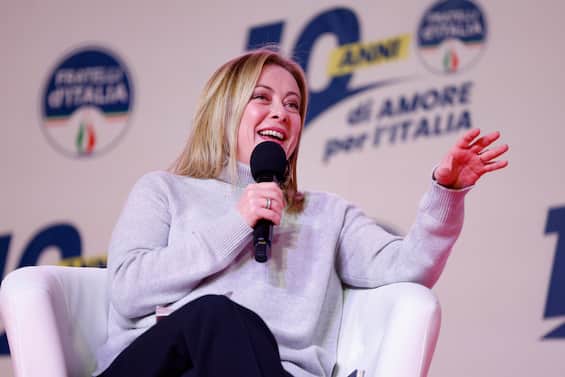 The leader of the government speaks at the closing of the party for the ten years of Brothers of Italy in Rome, interviewed by Sky TG24 journalist Roberto Inciocchi. You recalled the difficult moments of the foundation and thanked the allies. “They are making my job easier”

“We have overturned the predictions on FdI’s stability, I trust that we will do the same on the duration of the government”. This is how Giorgia Meloni presents herself at the closing of the party for the ten years of the Brothers of Italy in Rome. Interviewed by Sky TG24 journalist Roberto Inciocchi , recalled the beginning of his party: “Nobody bet on us and we too had some doubts”, underlined the premier, revealing how “before the 2019 European Championships I had promised myself to leave the presidency of the party if we had not obtained at least 4% of the votes. It went better than expected: we obtained 6.4%”. In addition, Meloni thanked the allies: “We know how the climate is everything in governments: thanks to Lega, Forza Italia and the other members of the majority we approved the Law of Budget in an hour, making political choices. I am not looking at re-election in 5 years, but at data such as GDP and employment, as well as the birth rate curve”, guaranteed the premier.

The political choices of the Maneuver

The occasion allowed Meloni to reiterate the goodness of the assessments made in these first months of government, including the Maneuver. “I am very satisfied with what we have done, especially under the given conditions. Someone would have put it off until next year, but not us”, said Meloni, who then reiterated his total lack of interest in the political nature of these choices. “I don’t want to think to my re-election in 5 years, but to the general future of this nation. When I die in a hundred years I will want to be sure that I have done what I had to do to improve it “. And to those who argue that the Brothers of Italy now in government have changed, Meloni replies convinced: “We have not changed. We are too deep a political and cultural proposal to be included in a label. We are not different from what we were, we are different from what others wanted to tell about us”.

Precisely for this reason, the premier has defended all the economic measures taken so far, such as the raising of the ceiling for payments with cash, the indexation of pensions and the tightening on basic income. “Intervening on income is not a way of hating the poor, as the left says, but this choice is made because we do not want to exploit the poor for an electoral campaign”, Meloni highlighted. The Prime Minister then defined the position of the CGIL as “bizarre, which maintains that the Maneuver is against the poor, but then when it comes to confrontation with the government, it defends the pos and says that the choice to index the minimum pensions more is questionable rather than tall ones. These are words I don’t expect from a left-wing trade union.”

Meloni also mentions the bitter confrontation between Rome and Paris. “It makes me smile as some press tell the story: but with Macron Meloni did we see each other, did we talk? We are not in elementary school. Relationships are less personal and more political. Italy and France defend national interests aware that a solution must then be found”. Many had wondered about the missed meeting between the Italian premier and the French president in Alicante, but on this Meloni revealed that “if I missed the Alicante summit it’s because I had a fever: I’m not old enough to wear with four like a bare-shouldered dress like at La Scala in Milan”. Nonetheless, the Prime Minister does not appear to be hesitating on the subject. “Italy has stopped passively accepting something unacceptable and has raised its head: the result is that the problem will be talked about”. Meloni’s assumption is that Rome’s role is absolutely central within the European Union. “Our ability to dialogue with everyone makes us important and allows us to count more. There is no Europe of Serie A and Serie B”.