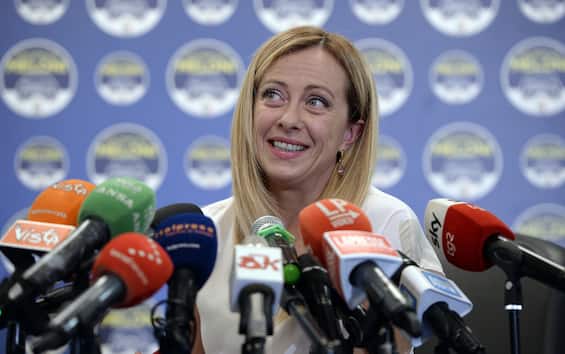 Thus the leader of Fratelli d’Italia, in an interview granted to Rtl 102.5 and shedding light on the premiership issue in the center-right. “I’m aiming for the best possible result. I don’t give limits but I’m too superstitious to give goals ”, she continued. And, after the failed Calenda-Letta agreement, you commented: “trivially we are facing an electoral calculation. We are witnessing a tragicomic ballet “

“If the name for Palazzo Chigi is me? If FdI gets an extra grade, yes? Why not? The rules in the center are clear ”. So Giorgia Meloni, who spoke on Rtl 102.5 for “Non Stop News”, explained the issue of the premiership in the center-right. “I’m aiming for the best possible result. I do not give limits but they are too superstitious to give goals “, continued Meloni, for which the 20% of Forza Italia that Silvio Berlusconi hopes” gives me hope, because I hope that all the center-right parties will be able to do their best. I’m interested in governing, not getting to the government. They are different things, ”she added.

Meloni: “Center-right took half an hour to find solutions”

“Quite simply we are faced with an electoral calculation. We are witnessing a tragicomic ballet ”. This, however, is the comment of the leader of Fdi about the electoral “divorce” between the Democratic Party and the Action. “On the one hand there is the soap opera, on the other hand the center-right is already quite ahead with the drafting of the program. The center-right is a coalition that took half an hour to find solutions. We are together by choice, on the other hand the only shared idea is ‘let’s beat the right’ ”, she then underlined. “I think that Calenda yesterday made his electoral calculation, perhaps he believes that outside the center left he can do something better but the strategy does not change: march divided to strike united. That is: ‘we try to do our best, pretending that we fight each other and then we get together in a nice heap’ “, concluded Meloni, according to which whether the center-left remains united or not in an alliance,” little changes, they would be together in a government “.