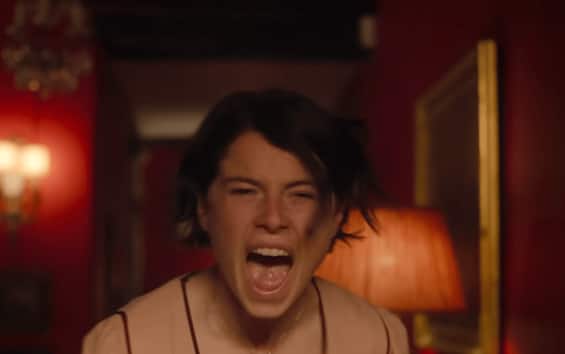 Fear eats the soul. Especially if you are a wife traumatized by the passing of a husband, unable to accept the idea of ​​a divorce. A female figure surrounded by males who all have the same face and the same desire to overwhelm you. And the pleasant English countryside turns into an open-air nightmare. The cottage of your dreams becomes a prison from which it seems impossible to escape. This is what he talks about Menthird and surprising feature film signed by Alex Garland later Ex Machina And Annihilation. At first glance it might seem like a cinematic pamphlet aimed at demonstrating the old adage, that is, men are all the same. Instead it is a surprising and frightening litmus test of our present. A mirror that reflects the world we live in. Maybe it’s not the most terrifying film of recent years. Many British and American spectators left the hall in terror during the screening. But you know the phobias are very subjective. Just think of Arachibutirofobia, the fear of peanut butter stuck to the palate. However, Men demonstrates how horror cinema (if done with skill and without concessions to marketing and algorithms) is the most effective genre to represent the human being in all its complexity and contradictions. Because as Lucio Fulci said, “the cinema of fear is made up of ideas” and not of more or less special effects or more or less successful prostatic tricks.

“Abandon all hope or you who enter” Already from the first exchange of words, it is clear that Harper Marlowe, the widow protagonist of Men, fell into Hades. In fact, Geoffrey, pot-bellied and quiet landlord, welcomes the young woman with this question: “Was it a journey from hell?”. And only apparently the reference concerns the M4, the very busy motorway that connects London with South Wales. With his protruding teeth, the standard burberry, the plaid shirt, the regimental tie, the clumsy owner of the cottage is a slouching Charon who predicts the future. The longed-for and bucolic vacation in the splendid setting will be transformed into a season in hell for the tenant looking for peace and serenity. Heaven does not live here in the Gloucestershire hills, in a rural area in South West England. The Cotswolds are an Averno made in England. And once again the apple will prove to be the forbidden fruit. Aeons have passed, but in a world fit for men. The tree of knowledge is a perpetual taboo for Eve and her daughters. The motto always applies who says woman says damage. So for the protagonist the danger lurks in the mansion, in that house with red walls and low oak beams. And at the end of the tunnel, not the light reveals itself, but a malevolent shadow, while the notes and voices of the Missa Syllabic composed by Arvo Pärt in 1977. A liturgy of cruelty, a knowledge of pain consumed in the shadow of a girl who rejects the trite cliché of the damsel in distress. And like a shower head, remorse and guilt levitate.

The cast of Men: Jessie Buckley and Rory Kinnear

In Men, patriarchy has a thousand faces. The talented Rory Kinnear is the mask and face of a toxic masculinity that reigns and rages in the village of Cotson in County Hertfordshire. Like Sir Alec Guinness in Blue blood or Kirk Douglas in 5 faces of the killer, the English actor masterfully embodies this gallery of country monsters. Starting with the slimy Vicar for whom it is not a cardinal sin if a man beats a woman, to then move on to Samuel, the nine-year-old student who addresses the protagonist with the unfortunately usual epithet “Stupid Bitch“. Evil multiplies and is reflected from the pub to the church, and by changing the order of the doppelgangers the result does not change. For the mournful Harper it becomes more and more complex to face this sinister parade of cruel archetypes. And Jessie Buckley (Oscar nominated for The dark daughter) confirms herself as one of the most versatile and complete actresses of her generation. Her performance gives us back all the complexity of a woman forced to confront her own demons, with the death of her husband and above all with a crowd of ferocious male persecutors.

From the Green Man to Sheela-na-gig, the pagan myths of Men

Only a courageous and visionary director of Alex Garland’s caliber can quote poetry in a horror film Leda and the Swan by William B. Yeats and the poem Ulisse and the siren by Samuel Daniels without being cloying and pedantic. Mentioned by the character of the Vicar, devoured by the sexual drive, even the rape committed by Zeus that led to the birth of Helen of Troy and “the beauty created to undo or be undone” are transfigured into accusations against the feminine polarity. And her arm transformed into a monstrous chela is the yoke with which to submit every woman to her will. And Men, with the anarchic and ingenious air of daring and disturbing works, he allows himself the luxury of playing with mythology and folklore. From Green Man, “The green man” who stalks the protagonist of the film. Pagan symbol of fertility, however present in many Gothic cathedrals, that entity made of flesh and leaves in the film’s finale is transfigured into the Sheela-na-gig, or the medieval sculpture representing a naked woman with a gigantic vulva. And in a grotesque surrealist compulsion to repeat, the male generates himself. A body horror anthology sequence, a tribute to that masterpiece represented by Society by Brian Yuzna. A delusional parthenogenesis, inobliable metaphor of the endless reproduction of male pride and prejudice. But on the notes of the poignant Love Songthe song by British singer-songwriter Leslie Duncan that opens and closes Men, we understand how simple and important the truth told by the film is. We just have to have the courage to look at it. And as the text of the ballad says: “Do you know what I mean? Have your eyes really seen?” (“Do you know what I mean? Did your eyes really see?”)