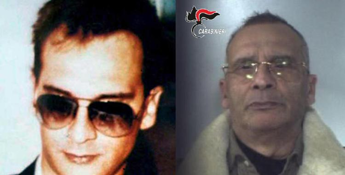 Uncensored and unknown to investigators, yet Giovanni Luppino went around with a switchblade with an 18.5 cm blade. Even on Monday morning, when he was arrested together with the mafia boss Matteo Messina Denaro. “I didn’t know it was Messina Denaro, only a madman could have accompanied him knowing that he was the boss. Believe me”, he swore for almost an hour in front of the investigating judge Fabio Pilato, who finally validated the arrest requested by the Dda of Palermo, on charges of procured non-compliance with the sentence and aiding and abetting aggravated by the mafia method. Luppino, assisted by his lawyer Giuseppe Ferro, defended himself before the Gip Pilato, claiming all the time that he did not know that the man he was accompanying was Matteo Messina Denaro. The olive merchant in Campobello di Mazara (Trapani) explained that he had met him a few months ago and that he had been introduced to him, with the name of “Francesco”, as the brother-in-law of Andrea Bonafede, the surveyor to whom the false card was registered of identity used by the super fugitive. And he added that he accompanied Messina Denaro for the first time last Monday to Palermo, where the boss had to undergo a cycle of chemotherapy, because this courtesy had been asked of him precisely because of his health conditions.

The prosecutors, however, do not believe him. “No element can currently allow us to believe that a figure who has literally managed to spend about 30 years on the run undisturbed has surrounded himself with figures who are unaware of the tasks performed and the associated risks, and indeed, the incredible duration of this fugitive in a decidedly opposite sense, leading us to believe that the extreme trust and bond welded with the figures of his own flankers somehow contributed to the procrastination of the time of his capture which, otherwise, could have actually occurred even in more recent times “, they write in the validation request.

And then, speaking again of the agricultural entrepreneur, the prosecutors of the DDA explain: “It is a well-known fact that the driver of a leading figure in a criminal organization such as the mafia is necessarily subject to the absolute trust of the ‘accompanied’ person”, defining Luppino a “dangerous subject”. “Despite the lack of censorship, it must be emphasized that the suspect is the person closest to the historic Trapani mafia boss on whom the forces of the prosecutor and the judiciary have managed to get their hands on today”, the magistrates still write.

Giovanni Luppino, for the prosecutors of Palermo, “is certainly a trusted collaborator of one of the last historical leaders of the mafia massacre and terrorist season of the Cosa Nostra organization, until today capable of maintaining anonymity and his state of fugitive in the face of hundreds of arrests of supporters and dozens of close relatives”. While the DDA says of the boss Matteo Messina Denaro that “he is probably the guardian of the truth inherent in the darkest pages of republican history”. Luppino, the driver of the boss Matteo Messina Denaro, according to the Prosecutor’s Office, “certainly contributed, in a material and causal sense to the continuation of Messina Denaro’s fugitive, by acting as his driver and personal companion, he certainly guaranteed these the possibility of moving to via reserved without the need to resort to means of locomotion directly conducted by the fugitive himself or public or private means of locomotion that could in any way ‘expose’ him to capture”.