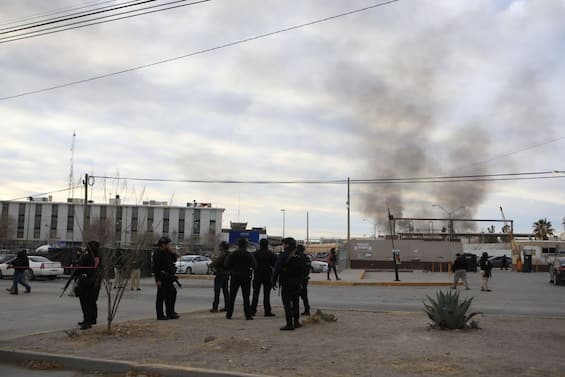 At least 14 people died and 13 were injured in an attempted breakout from a prison in northern Mexico on the US border. This was reported by the authorities of the state of Chihuahua, according to which 10 agents and four detainees lost their lives in the incidents that broke out at dawn, when an armed gang arrived aboard armored vehicles and opened fire on the Ciudad Juárez prison, as family members waited to enter the facility for their New Year’s visit.

According to local media reports, the assailants tried to free the detainees and at least 24 prisoners managed to escape during the attack. Shortly before the assault on the facility, several police officers were assaulted. Two suspects were later killed and four arrested.

One of the most dangerous cities in the world

Born in 1659 with the name of El Paso del Norte, in 1888 it changed its name to Ciudad Juárez or simply Juárez, in honor of President Benito. Since the early 1900s it has become the most important border city in Mexico and since the 1990s it has been sadly known to the world for being the scene of violent serial murders of women. Since 1993, in fact, it has become famous because of the crimes perpetrated against young women, generally of humble social origins and employed in the numerous maquiladoras, factories where export goods are produced. Furthermore, the Mexican city is also known to be home to one of the most significant drug cartels in the world. For more than 15 years, the armed wings of the Sinaloa and Juárez cartels have been vying for control of the city.

Currently, with a homicide rate of 85 per 100,000 inhabitants, Ciudad Juarez is in fifth place in the ranking of the most dangerous cities in the world.