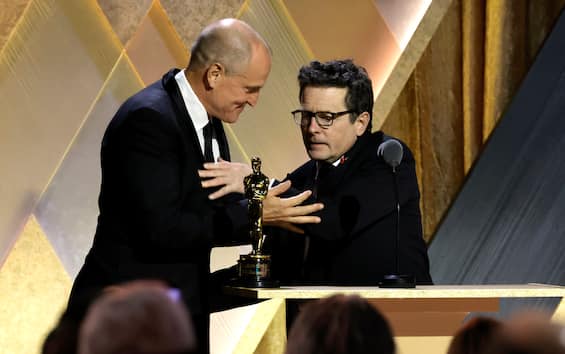 Michael J. Fox was awarded the Academy Award for his humanitarian efforts, the Jean Hersholt Humanitarian Award. The legendary actor of Back to the Future he received the award on November 19 in Los Angeles, presented to him by the Academy. Fox was called to the stage and introduced by actor Woody Harrelson during the Governors Awards ceremony, the Academy’s honorary awards.

Fox, winner of 5 Emmy Awards during his career, now receives the prize for those who bring credit to the film industry thanks to humanitarian efforts, the Jean Hersholt Humanitarian Award. The US actor has raised $1.5 billion for Parkinson’s disease research, which is why he was awarded.
He received a standing ovation from the audience. “You’re creeping me out,” said Michael J. Fox.

When he was 29, he was diagnosed with Parkinson’s disease, a disorder that causes tremors and other symptoms. After his diagnosis, he initially continued acting in movies and TV shows, including Spin City, The Good Wife, Stuart Little And Atlantis: The Lost Empire.

He then decided to abandon the film industry, dedicating himself entirely to the financing of scientific and medical research: he founded the Michael J Fox Foundation for Parkinson’s Research, a foundation in his name whose goal is to finance the search for a cure.

The delivery of the prize

Actor Woody Harrelson introduced the former stage colleague and called his longtime friend “a master of comedy” who possesses an “invincible superhuman quality.” He also noted how Fox “turned a chilling diagnosis into a daring mission.”

The actor of Back to the Future received a standing ovation from the audience, which included Academy Award winners Tom Hanks, Laura Dern, Mindy Kaling and Jennifer Lawrence.
She accepted the Jean Hersholt Humanitarian Award from the board of directors of the Academy of Motion Picture Arts and Sciences, the group that distributes the Academy Awards.

“It’s a creep to stand here and accept your kindness,” Fox said in his Oscar acceptance speech.

In his speech Michael J. Fox wanted to note how the most difficult part of his initial diagnosis was finding himself “grappling with the certainty of the diagnosis and the uncertainty of the situation”.
He explained: “I just knew it was going to get worse. Diagnoses were definitive, progress was indefinite and uncertain.”

He went on to say that for seven years, he chose to hide the diagnosis from others, opting to keep it private. The reason? “I didn’t know if an audience would laugh if they knew I was struggling (Parkinson’s disease),” confessed Michael J. Fox.
But when she went public with her diagnosis, the response from fans as well as the reaction and support from colleagues in the entertainment industry have been “transformative,” she said.

Thanks to his wife

The actor also thanked his wife, Tracy Pollan. She “made it clear that she was with me for the duration,” Fox said, explaining the support and help he’s received over the years from his life partner, who has never left him since Parkinson’s disease hit him. been diagnosed for the first time.

The other honorees at the Governors Awards: Diane Warren

Other entertaining personalities honored with honorary Oscars include celebrated and prolific singer-songwriter Diane Warren, whose songs have been featured in more than 100 motion pictures. Some of her biggest hits include If I Could Turn Back Time by Cher, Love Will Lead You Back by Taylor Dayne, Unbreak My Heart by Toni Braxton e Because You Loved Me by Celine Dion.

Warren was nominated for an Academy Award for Best Original Song thirteen times throughout her career, but never won. “I’ve waited 34 years to say this: ‘I’d like to thank the Academy,'” Warren said during her acceptance speech.

Also awarded were Australian director Peter Weir, known for films such as Witness – The Witness (1985) and The fleeting moment (Dead Poets Society1989) and Euzhan Palcy, the first African-American woman to direct a film produced by a major Hollywood studio.

You can watch the video of the moment Michael J. Fox collects his honorary Oscar below.