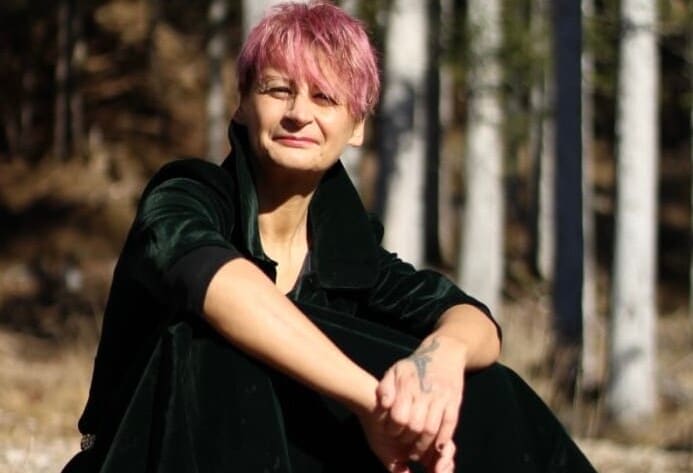 I’m Michela Sbrizzai, born in 1972 from Udine. I present my piece in Carnic dialect entitled “Al For”, where I tell about my small town of belonging, Forni Avoltri, the largest in Carnia. The idea of ​​this song, so particular due to its text in dialect, was born after a long writing journey with the well-known record producer Piero Calabrese, who passed away in 2016. Encouraged and encouraged by the manager and record producer Maria Totaro I decide to produce the song in the studios of MMline Production Records, as a dedication and homage to this dear producer, my mentor and teacher.

I am therefore talking about Forni Avoltri, a characteristic mountain village, the northernmost in Friuli Venezia Giulia, located on the border between Veneto and Austria. The first documents certifying its real presence in Carnia bear the date of 1328 and also the origin of the name refers to ancient customs: “Forni” derives from the factories present on site where the minerals extracted on Mount Avanza were worked (iron, copper and silver). “Avoltri” instead derives from the ancient “ab velrum” which meant beyond the river, the Degano, present close to the town. The municipality has a typical mountain area, with various tourist attractions and landscapes of extreme beauty. Many know it for the production of a very famous mineral water but the town is an ideal location for those who love the mountains, sport, unspoiled nature, the typical Alpine huts. Even the culinary traditions refer to ancient recipes of the past, such as the preparation of stuffed pasta, the cjalsòns, a dish that has become a symbol, witness to a knowledge handed down from generation to generation.

It is one of the highest municipalities in Friuli and among the peaks that surround it dominates Mount Coglians, the highest peak in the whole region. The naturalistic beauties continue with the discovery of the Source of Fleons and the geological park of the Carnic Alps. Last but not least, I mention the Bordaglia lake, an authentic pearl of natural beauty set in the ring of woods and mountains. The country has suffered great fighting in both World Wars and everything is documented in the present “Museum of the Great War”, another attraction for visitors.

For me this passage has a very profound meaning, because loving one’s land means wanting to reconstruct its past, its history, day after day, to better discover its present and plan its future. Loving the place where you were born is like receiving back what you are. Enhancing and bringing out what surrounds one’s territory is like giving voice to our culture and demonstrating to the world the true essence of oneself, of one’s traditions, of ways of being, of one’s life. Man has always invented, created, destroyed, hoped, composed, erased, produced. But through music he can create “contours” that give shape to sensations, bringing to light his emotions. And I really wanted to demonstrate this with “Al For”.