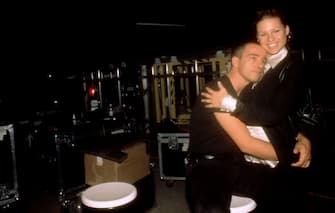 Michelle Hunziker and Eros Ramazzotti first met in 1995, when the singer was 32 and she was 18.

The presenter, however, revealed that she fell in love with him even before meeting him. Watching TV when she was 9, she would have told her mother that she would have married Eros Ramazzotti

The showgirl said that the day after the first meeting with Eros, she took the train and ran away, returning to Bologna, thinking she didn’t care. The next day Eros showed up at her house, after asking all the nearby bars where Michelle lived

An intense and strong love was born immediately between the two, despite the young age of both

In 1996 from their love was born Aurora, to whom the singer dedicated the song The Aurorawith sweet and delicate tones

Also in 1996, Eros Ramazzotti dedicated to Michelle, now the companion and mother of his daughter, the romantic and intense The best thingwhich soon became one of the Italian romantic songs par excellence

WATCH THE VIDEO: Eros Ramazzotti, his most beautiful collaborations

In April 1998, Michelle Hunziker and Eros Ramazzotti celebrate their wedding at the Orsini Odescalchi castle in Bracciano. Among the guests there is also Tina Turner protagonist of a fairytale concert

Michelle Hunziker and the new haircut after twenty-five years VIDEO

Around 2000 a difficult period began for the couple, which culminated in 2002 with the separation and in 2009 with divorce

WATCH THE VIDEO: Eros Ramazzotti, the videoclips of the most famous songs

Michelle stated that they could have fought to save the romance, but they were young and instead of outside help, they found who separated them even more.

Michelle Hunziker and Tomaso Trussardi broke up after 10 years: history

Only in 2017 did the presenter find the courage to tell, through a book and interviews, the bad experience in a sect, identifying it as one of the causes of separation from her husband.

After their romance ended, they both found happiness alongside other partners. Michelle Hunziker was linked to Tomaso Trussardi from 2011 to 2022: their daughters Celeste and Sole were born from their marriage in 2014

Eros Ramazzotti met Marica Pellegrinelli in 2009, then married in 2014. The couple had two children, Raffaela Maria and Gabrio Tullio, but in 2019 they separated

Despite the divorce and a marriage each, the relationship between Michelle Hunziker and Eros Ramazzotti has never been ruined, thanks also to the strong love that binds them to their daughter Aurora

As a demonstration of the affection that still binds them, Michelle Hunziker invited Eros to her program Michelle Impossibleduring which they retraced their history together