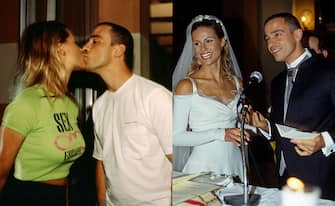 Michelle meets the singer after a concert Eros Ramazzotti. Their love was overwhelming and from their relationship, in 1996, their first daughter was born, Aurora. In 1998 the marriage, then the separation in 2002 and the divorce in 2009. Today a good relationship flows between the two and, as the singer says: “We wanted to show something simple and beautiful: that a love, however great and however deep, it can end without the affection, the sharing, the desire for the other to be happy disappearing ”

Michelle Hunziker and Eros Ramazzotti, the story of the couple in 14 photos

Michelle Hunziker and the new haircut after twenty-five years VIDEO

Two years later, in 2007, the Hunziker reads in Christmas on a cruise, cinepanettone of that year, and it is precisely on that occasion that he knows Luigi De Laurentiisson producer of Aurelio De Laurentiis. The two are together for a couple of years but then the story comes to an end

Michelle Hunziker, the most beautiful looks of her career

A short love also comes with the actor Daniele Pecci

In 2011 Michelle Hunziker gets engaged to the entrepreneur Tomaso Trussardi. The couple got married in 2014 and together they have two daughters: Sun And Heavenly. An eleven-year long love, officially ended in January 2022 when the two released a note to theHandle in which they announced the end of their marriage

Michelle Hunziker and Tomaso Trussardi broke up after 10 years: the story of the couple

The last man to enter the life of the Swiss presenter is Giovanni Angiolinidoctor and former competitor of Big Brother 15. The love story between Michelle And John seemed to flow smoothly until a few days ago: according to rumors today the two seem to be in crisis

Kiss between Michelle Hunziker and Giovanni Angiolini: who is the new flame. PHOTO