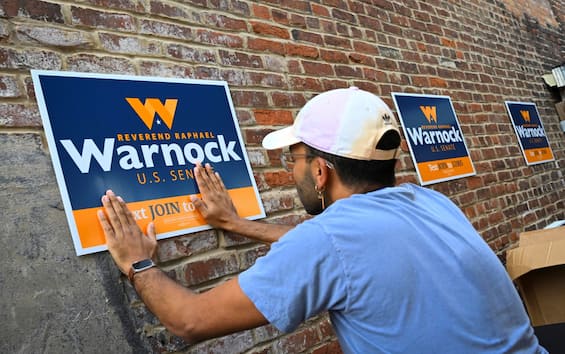 Definitive test for US Republicans and Democrats in the Senate ballot in Georgia. With the challenge between Donald Trump’s controversial protégé, Herschel Walker, and the Reverend Raphael Warnock, the Donkey’s party aims to win the 51st seat in the Upper House, the crowning achievement of the surprise success at the Midterms and also an important signal for the future of Joe Biden and his administration, while the Grand Old Party hopes to recover after the scandals and gaffes of its candidate and obtain a victory that would serve to block the president’s agenda for the next two years.

In Georgia the most expensive campaign of all midterm elections

Also demonstrating the key role of this race is the fact that the campaign in Georgia was the most expensive of all the midterm elections, with $400 million spent in total and a record number of people, 1.85 million , who have already voted. While Trump and Biden stayed away, Barack Obama took the field once again for the Democrats in the southern state, after the extraordinary result in Pennsylvania. “I’m here to tell you that we can’t give up,” the former president told an enthusiastic crowd. In recent days, former First Lady Michelle also appeared for a stop in Atlanta on the presentation tour of her new book. The candidates made their final appeals: former local football legend Walker reaffirmed his commitment to play the role of “controller” of the Biden administration, while the reverend Democrat bet on his “expertise” and “character ” capitalizing on the scandals of his opponent accused of domestic violence, forcing two women to have abortions and, most recently, still having his residence in Texas.

Latest CNN polls: the Democratic candidate ahead by 4 percentage points

The latest polls give Warnock a slight lead, but the margins are narrow. In a CNN poll Friday, the Democrat led by four percentage points, 52% to 48%. In another poll released Thursday by Emerson College and the Hill he was ahead by two percentage points. For Biden, the Democrat’s victory would be a big blow for the next two years. With a real majority in the Senate, the president could speed up the process of confirming his candidates in strategic administration and justice roles and would have a parachute in case some Democratic senators, as happened in the past with Joe Manchin, were to ‘betray’ the party line. Not only that, Democrats would gain more seats and more financial resources on Senate committees, and presidents would no longer need Republican support to subpoena witnesses in investigations. “51 is better, the bigger the numbers the better,” Biden said last month of the Georgia matchup.