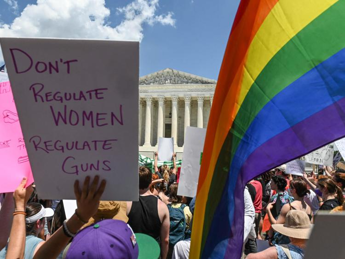 Massimo Faggioli, professor of History of Christianity at Villanova University in Philadelphia, “for 40 years the Republican party has won with anti-abortion positions, now that the Supreme Court has abolished the sentence legalizing it loses”

In these midterm elections, the Supreme Court ruling on abortion, “a result pursued and dreamed of for 50 years by US Catholic republicans and bishops”, proved to be “a poisoned fruit because it now puts the Republican party at a disadvantage”. Thus Massimo Faggioli, professor of History of Christianity at Villanova University in Philadelphia, comments with Adnkronos on the results of the midterm elections in which abortion, even beyond expectations, “made the difference”, preventing the overwhelming Republican victory of the polls were talking about.


“In some states in the last few Republican years the abortion factor has shifted enough because it’s not just Democrats who want legal abortion, this is one of America’s hypocrisies that has unfolded,” adds the author of “Joe Biden and Catholicism in the United States “, published in Italy by Morcelliana, recalling how the voters of states such as Kansas -” which has become the symbol of rabid conservatism in the last 30 years “- or Kentucky approved referendums to defend the right of choice.

For Faggioli it is a passage of “historical value, the overthrow of the last 40 years in which, from Ronald Reagan onwards, the Republicans also win for their opposition to legal abortion”. Now that Roe vs Wade – the Supreme Court ruling that legalized abortion for 50 years – has been overturned by a conservative majority court, “which is now a false image of the country”, Republicans are forgiving “because alternative is chaos at best. ”

According to the historian of religions, the vote was moved by the “fear of an anti-abortion extremism that made the party that had promised to stop the progressive wave on gender, gay marriage lose”. And, to those who ask if it was only the Democrats who voted in this sense, or if it is also possible to hypothesize the vote of pro-choice Republicans, she replies: “Both, of course we will have to see the analysis of the vote, but there is no ‘doubt that American feminism on abortion is much more transversal than you think, it is no coincidence that in the GOP it is the majority of men who take sides against abortion “.

As regards the position of the American bishops, Faggioli underlines that it will be interesting to follow next week the plenary assembly of the Bishops’ Conference which, he recalls, “has split in recent years on the question of communion with Joe Biden” for his support for the ‘abortion. “A certain part of the bishops until yesterday thought that the victory in June – he adds referring to the sentence of the Supreme Court – was the beginning of a movement, instead it is more complicated, they understood that the country is split in two and there is none. it’s a new pro-life majority they imagined. “

Beyond the results, and the abortion issue, Faggioli underlines how these midterm elections reassure “being the first after the 2021 coup on January 6” and “reopen the games for 2024, because now Biden will be able to say that he can win and run again, while the Republicans have a glaring problem Trump, because he plays for himself “and has proved to be a counterproductive burden.

But if the Republican party now has before it “the dilemma of being a Trumpian with Trump or without Trump”, the Democratic party perhaps has an even more complex one: “The Democratic party has two souls, the twentieth-century one, which says we must make social policies for the less well-off, and another party, which says we must become what the Radical Party was in Italy “explains Faggioli, underlining however that important traditional electorates of Democrats, such as the Hispanic one,” are not comparable to the culture of the intellectual elites who think that gender is an invention “.

“And this interests Latinos, men, women, young people, and it doesn’t have to do only with being religious, it’s just a way of seeing things.”, He adds referring to the fact that Latinos are now one of the main components of the American Catholic vote.

“The Democratic Party draws an important lesson for 2024 – he concludes – if it relies on Joe Biden who speaks to the workers if he relies on the new generation it is a mortal risk, for the Democrats the dilemma is existential: the old twentieth-century base that workers, immigrants automatically for the democrats is no longer true, and they have to rebuild a social and ideological basis that doesn’t work by adding a little gender, a little gay, a little Latinos, a little Asians’ “.