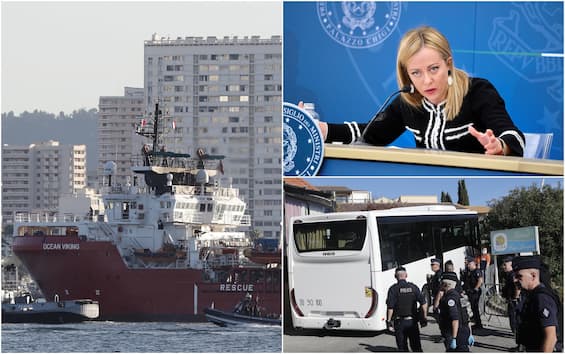 The clash between Italy and France on the issue of migrants does not subside, after the docking of the Ocean Viking ship of the NGO Sos Méditerranée (with 230 people on board) in the port of Toulon. To resolve the crisis between the two countries, the EU is moving, seeking mediation. The Commission, through the mouth of Vice President Margaritis Schinas, has announced that it is working on “an emergency plan” and has requested an extraordinary meeting of the interior ministers, before the December Council (MIGRANTS: THE SPECIAL).

The move by Brussels came on Friday evening, after two days of sparks between Rome and Paris and the rupture of the latter which led to the suspension of the agreement on relocations. The case of the Ocean Viking triggered the fuse: Italy refused a safe harbor and France allowed the landing in Toulon. But you also attacked our country. On Friday, Interior Minister Gerald Darmanin, in particular, called the Italian decision not to open its ports “incomprehensible and inhumane” and promised a harsh retaliation: the tightening of the borders in Ventimiglia, with controls that have already been strengthened , and the suspension of the reception of 3,500 refugees from Italy, all accompanied by an appeal to other EU countries to do the same. On Saturday, Minister for European Affairs Laurence Bonne spoke of a “relationship of trust” between the two countries that is now “broken”. Giorgia Meloni held the point, recalling that “only this year Italy has welcomed 90 thousand refugees” and that no agreement provides for Italy to be the only port of disembarkation.

The Italian premier defended Rome’s decision not to dock the Sos Méditerranée ship, saying she was “very impressed” by the “aggressive, unjustifiable and incomprehensible reaction” of the French. Then he highlighted “two numbers”: the “230 migrants” on the Ocean Viking, “the first ship” of an NGO “that has ever docked in France”, against the “almost 90 thousand that Italy has allowed in” alone this year. As for relocations, there were only 117 out of the 8 thousand agreed, just 38 in France: “Something is wrong”, stigmatized the premier. At the root of the migration problem, according to Meloni, there is always a lack of solidarity within the EU. We need to adopt a “common solution” that envisages “the defense of the EU’s external borders, blocking departures, opening hotspots,” she said. The alternative would be to “argue every time with France, Germany, Greece”, but “isolating Italy would not be intelligent” and therefore “I hope it does not happen” and that “the smugglers isolate themselves instead,” she added. Meloni said she was “always ready for dialogue”, but she also warned the partners: “We are no longer able to deal with it and we have a mandate to deal with it in a different way”. And to those who asked her if she had other measures in mind to stem the flows, such as the confiscation of NGO ships, she replied: “There will certainly be new measures”.

To try to mediate, the EU has therefore decided to convene an ad hoc meeting on migrants. Commission Vice President Margaritis Schinas explained that “an emergency plan is being drawn up in Brussels to resolve the growing tensions between EU countries on how to deal with asylum seekers rescued at sea”. The meeting, explained sources in Brussels, would be used to take stock of the new crisis and carry out a European initiative. The meeting is expected to take place before the Internal Affairs Council scheduled for the first week of December. Meanwhile, waiting for the extraordinary meeting, Antonio Tajani will be the first to address the migrant crisis at the Foreign Council on Monday in Brussels, where Italy has asked for it to be included on the agenda. The head of the Farnesina will meet his Greek colleague in Rome on Wednesday. EU affairs colleague Raffaele Fitto also spoke of “European solution” and “clear rules”, assuring that Italy “has no intention of jeopardizing diplomatic relations”. And even the President of the Republic Sergio Mattarella warned: “You win with solidarity, in the EU you need mutual trust”.

Nordio: the problem is global, we need a response from everyone, from the EU to the UN

The Minister of Justice Carlo Nordio also spoke on the matter. In an interview with Gazzettino, he said that reopening the debate on migratory flows in Europe “was inevitable because the problem has almost always been tackled in political, ideological or even emotional terms, while it must be put in rational terms. In Africa alone they live at least three hundred million people in a state of extreme hardship. How many can we welcome? All of them? Or fifty million? Or five million? And who is to welcome them? Italy alone, or Europe? Or the rest of the world? point I would expect a response from all our interlocutors, from the EU to the UN, because the problem is global “. The migrants, he added, “arrive without money, without work and without prospects. The only thing they have are the debts contracted with the smugglers, who do not demand payment through lawyers, but threatening to cut their throats. most of these poor people are almost unavoidable to resort to illegal financing, such as small drug dealing, theft and prostitution for many women “. Our prisons, Nordio said, “are already beyond the limit of tolerance”: a percentage of the prison population, sometimes up to 50%, “is made up of immigrants”. At the moment, the minister declared, “the government’s line is sacrosanct: we must send everyone the message that Italy is not, or at least no longer, the only main country of arrival for migrants, which will then take care of them. stay”. But with France, he stressed, “not only can we, but we must” mend: “My meeting in Paris with my French counterpart was already planned in the next few days. I am sure that, even without going into the merits of this issue , we will understand each other on the most important problems “.

As for the migrants aboard the Ocean Viking, they landed in Toulon on Friday. Germany has made it known that it will welcome 80 and, unlike France, has confirmed that it will keep faith with the commitment to welcome the 3,500 migrants under the European solidarity mechanism. But he clarified that this support will continue “as long as Italy holds true to its responsibility for welcoming migrants rescued at sea”. Luxembourg and the Netherlands are also on the same line as Berlin.