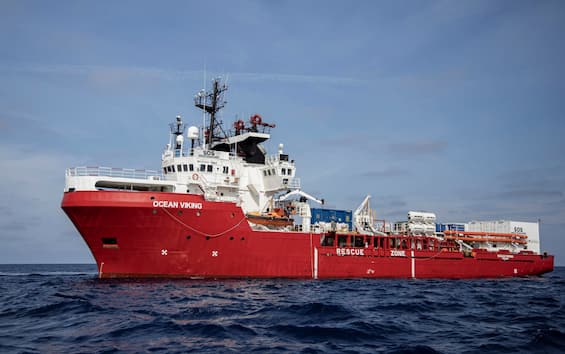 While the Ocean Viking arrived in Toulon, there is a clash between Italy and France on the migrant issue (THE SPECIAL). The case of the ship exacerbates the crisis: after the refusal of a safe harbor by Rome, Paris has decided to welcome it but has attacked our country. French Interior Minister Gerald Darmaninha called the Italian decision not to open its ports “incomprehensible and inhumane” and promised a harsh retaliation: the tightening of the borders in Ventimiglia, with 500 agents already deployed, and the suspension of reception of 3,500 refugees from Italy, accompanied by an appeal to other EU countries to do the same. “I believe that a disproportionate reaction has come from France,” replied Italian Foreign Minister Antonio Tajani. Even the owner of the Interior Matteo Piantedosi spoke of an “incomprehensible reaction”, underlining how Italy was left “alone”. “We need cooperation between states. There is a legal obligation to rescue “, commented the European Union.

The Ocean Viking in Toulon

Paris therefore decided to welcome the Ocean Viking to Toulon, in the south of France. The ship arrived in front of the port with rescued migrants in six different operations between 22 and 26 October. Three critically ill people and a family member were evacuated yesterday morning to receive emergency care at the hospital in Bastia, Corsica. The other migrants will be able to disembark shortly, after more than two weeks of waiting at sea for the assignment of a safe harbor. Minister Darmanin announced that nine European countries have pledged to welcome “two thirds” of the 234 migrants on board. Among the countries, he added, is Germany, which will receive “over 80 people”. Croatia, Romania, Bulgaria, Lithuania, Malta, Portugal, Luxembourg and Ireland, the minister said, will also welcome migrants in the name of “European solidarity”. The refugees who will be welcomed will be those “compatible with the asylum request”, explained Darmanin, reiterating that “those who cannot obtain asylum will leave directly for their country of origin”.

The clash between Italy and France

France’s decision to open the port of Toulon came after days of tensions and accusations, with migrants in the middle of the sea without a port in which to disembark. The ship of the NGO Sos Mediterranee, explained Minister Darmanin, will be received in France only “on an exceptional basis, at the request of the President of the Republic, and taking into account the 15 days of waiting at sea that the Italian authorities have made passengers suffer” . He then criticized “Italy’s choice not to consider itself as a responsible European state”. Darmanin spoke of “serious consequences for bilateral relations”. And it was not a simple warning: first he suspended the planned reception of 3,500 refugees currently in Italy, inviting all the others, “especially Germany”, to follow suit. Then he gave the green light to the “strengthening of border controls”, where “500 agents have already been deployed”. In summary, concluded Darmanin, in this dispute “it will be the Italian government that will lose out”.

The reaction of Italy

After the attack in Paris – which defined Italy’s decision not to open its ports as “incomprehensible and inhuman” – Rome responded by reiterating that “incomprehensible” and “disproportionate” is the position taken by Paris. The Meloni government has taken a counterattack. Italy has welcomed tens of thousands of migrants, just a few hundred of them, ministers Antonio Tajani and Matteo Piantedosi recalled, with the latter in particular who denounced a European solidarity that was only “heralded”. “We have 90 thousand. arrivals and we had an agreement for the redistribution of 8 thousand migrants but so far only 117 have been redistributed. And now we are talking about 234 people who are arriving in France “, underlined the head of the Farnesina, calling for” greater serenity “and” solutions at European level”. The same numbers were recalled by colleague Piantedosi, who claimed the government’s firmness line, calling into question the lack of European solidarity. In the face of “absolutely insufficient relocations”, the head of the Interior Ministry underlined, “we want to impose the principle that Italy is the only possible landing place in Europe for illegal immigrants, thus determining a notably growing flow of entries in these last three years “. With the result that “our reception system is in very serious difficulty”. On November 16, at 11.45 am, Piantedosi will hold urgent information on the situation of migrant ships in the Chamber.

The concern of the EU

Meanwhile, the Rome-Paris clash in Brussels is being watched with concern. The Commission, while reiterating the need to respect “the legal obligation to rescue”, has called for “cooperation” between Member States, also to make progress in the “pact on migration”. “We are here to help, we do not want to place the blame on one state or another”, was the clarification.